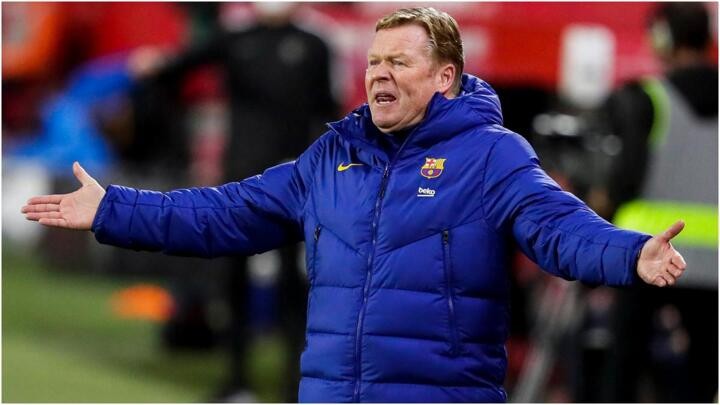 Barcelona may sit fourth in LaLiga, eight points behind leaders Atletico Madrid, but Ronald Koeman has not given up hope.

Ronald Koeman has not given up on Barcelona winning LaLiga as they face a pivotal run of fixtures that could define their season, starting with Elche at home on Wednesday.

Barça sit fourth in the table after only managing a draw at home to Cadiz at the weekend, a surprise result that ended a streak of seven successive league wins.

However, with leaders Atletico Madrid losing at home to Levante, meaning they have managed just one victory in their previous four outings, Koeman retains hope his team can make up ground and get involved in a title race.

Atleti have a three-point cushion over second-placed Real Madrid, who have played a game more than their neighbours, while Barcelona are eight points adrift.

In between the two Clasico rivals are Sevilla, to whom Koeman's side travel to play this weekend in league action. They then host the same opponents next Tuesday in the second leg of their Copa del Rey semi-final, Barça needing to overturn a 2-0 deficit from the previous meeting if they are to progress.

"I still believe that we can fight for the championship," Koeman told the media ahead of the visit of Elche to Camp Nou. "Results are showing that each team can come down.

"It will depend on the two games that come, which are very important to fight for the title.

"Then, in the cup, we have to come back. In the two competitions, we can do things. This week, we have three games that are important.

"It is difficult because we have to overcome a home game against Sevilla without an audience, with an audience it would be easier."

Barça had 20 attempts and 81 per cent of possession against Cadiz but were punished for their wastefulness when Clement Lenglet was ruled to have fouled Ruben Sobrino in the penalty area, allowing Alex Fernandez to convert for an 89th-minute equaliser for the visitors with their only shot on target.

While they have scored 50 goals in LaLiga this campaign – the most by any team in the competition – Koeman wants to see his players become more ruthless in attack.

"The problem is not that we do not create. It would be worse if we did not create opportunities," the Dutchman said when reflecting on Sunday's performance.

"We must ask for more effectiveness from the players at the top. We create opportunities and we did not score to make it 2-0.

"These are important moments and, this season, we lack effectiveness. The percentage of goals is low for a team like Barcelona."

Koeman confirmed that Ronald Araujo is not yet ready to return from injury, though the defender is "improving" and could feature in either of the upcoming games against Sevilla.