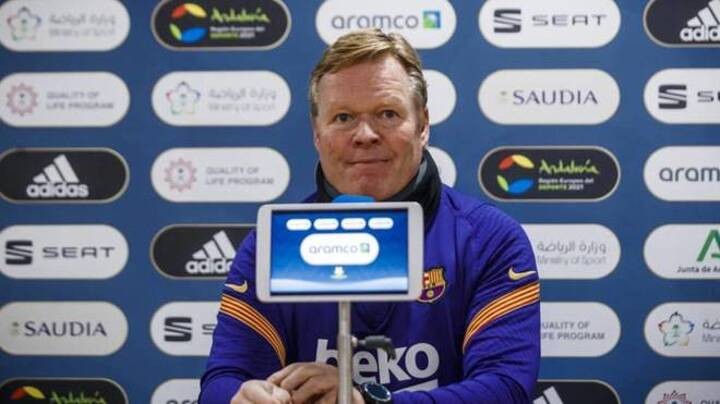 Barcelona boss Ronald Koeman has responded to quotes from Paris Saint-Germain sporting director Leonardo, where he stated that the French club would be interested in Lionel Messi if he is available when his contract expires in June.

The Dutchman did not seem too surprised by the comments, stating that he himself would not mind taking two of PSG's star forwards.

"If you also ask me if I have interest in Neymar or [Kylian] Mbappe, I would say yes," Koeman said during Wednesday's pre-match press conference.

Messi received his first-ever red card for Barcelona in the Supercopa de Espana final, so has the Dutch coach noticed anything different about him in training in the last few days?

"Leo has trained very hard. I haven't seen anything unusual about him," Koeman confirmed.

"Everyone was sad about the result of the final, but we kept going. We are on the way to improving things. The game... in defence we have to improve. Leo is very involved."

Francisco Trincao has been criticised by some after his 31 million euro move from Braga last summer, but Koeman has emphasised patience with the winger.

"He's come all the way from Braga, he's young," he stated.

"Taking a step to a club like Barcelona is a giant step. You don't have to go too fast.

"He is working very well, trying to earn minutes. He's not playing much, there's a lot of competition. We count on him a lot for the future of this club."

There are some inside Barcelona, including Koeman, that are pushing for the arrival of Eric Garcia this January, despite the club's dire financial state. He does, however, recognise the difficulty in doing so.

"I have always said that I am not the one who has to [consider] the economic decisions of a transfer," Koeman explained.

Someone who could depart the Camp Nou in this transfer window is Matheus Fernandes.

"In principle I have no preference for a team for him," Koeman said.

"He is a player to whom we have not given many minutes, a young player."