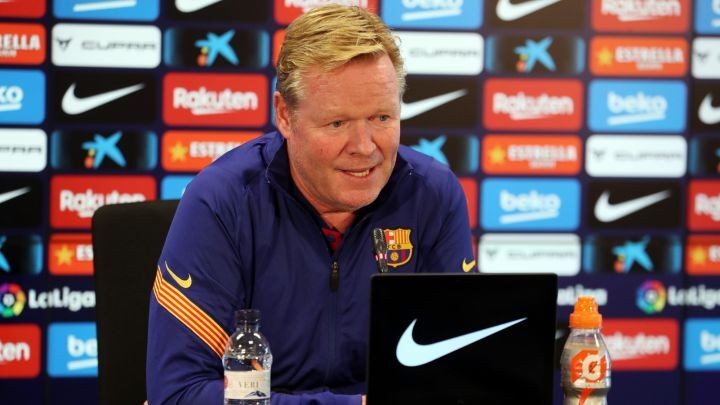 Barcelona head coach, Ronald Koeman, insists that the team "needs more players because in certain positions we are very limited."

Speaking ahead of Barcelona's return to LaLiga, head coach Ronald Koeman answered questions on Maradona, Messi and his first 100 days at the club.

On Barcelona's clash with Osasuna

A difficult game awaits us. Osasuna will defend well.

Dest trained well today, but tomorrow we know for sure. Today we've talked about who will play there if Dest can't play. We have to wait until tomorrow to know if he is available or not.

The importance of rotation

The team that played in Kyiv gave a very good showing, and I really liked the rhythm of the game. Covid-19 has a lot of influence on injuries, we need more players. In some positions we are a bit limited, and we also had bad luck.

Messi and De Jong have had a good rests. Hopefully they'll be fresh and ready tomorrow.

The best tribute to Maradona would be a strong display on the pitch tomorrow. I played against Maradona when he was at Sevilla, he did plenty in the warm-up. I spent more time watching his warm-up than actually warming myself up!

I have had quieter days at previous clubs, but I'm happy to be here. It's time to react now, and cut the distance with clubs ahead of us in the league table.

Aleñá has improved a lot, it took him a while to adapt to the new system. He's changing things up, in order to be a Barça midfielder. I can't talk about what will happen in January.

Set pieces are harder for us because we don't have many tall players.

Mingueza will have plenty of chances to play due to the injuries we currently have in the squad. We are very light in defence. I will decide tomorrow if he plays.

How can the team improve?

If we play at a high pace, we're very good. Sometimes we relax and slow down. We need more intensity