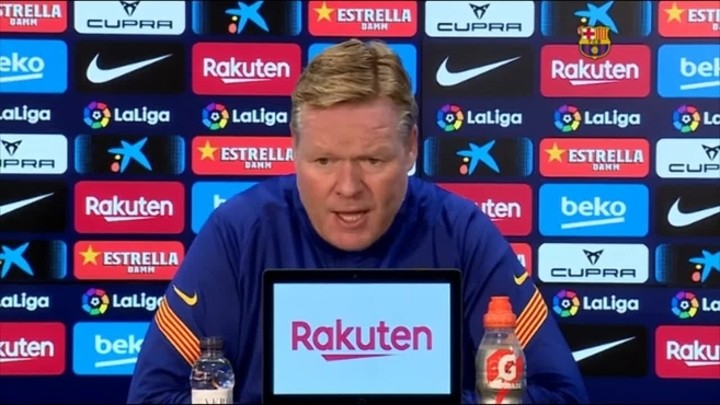 Ronald Koeman has reflected on his first 100 days in charge of Barcelona and called on his players to pick up their game in LaLiga Santander.

The Dutchman has overseen a difficult start to the season in the domestic competition at the Camp Nou, though Barcelona's form in the Champions League has been very good.

"I'm not giving myself any grades," Koeman said ahead of Sunday's game against Osasuna.

"I've come to be the coach of this great club. It's a delicate time. We have to work hard and change things when we have to.

"I've had a more relaxed 100 days as the coach of other clubs, that's for sure, but I'm happy.

"COVID has limited us as well. We have seven games before the end of the year and the time to react in the league is now.

"We have to reduce the gap between the teams at the top. If we're in a game where there is intensity and rhythm, we're very good. Sometimes our level drops and we get distracted without the ball. We need to play with more intensity.

"It's not easy to know what is behind the differences between the Champions League and LaLiga. It could be that [in LaLiga] our opponents play more defensively and, in Europe, they're more open.

"But at the end of the season, we'll be able to say what's happened. The team really hasn't deserved to drop as many points. We have more confidence in the Champions League."

Lionel Messi did not travel with the squad to face Dynamo Kiev in Ukraine in midweek and is expected to return to the team against Osasuna.

"I think he's had a good rest, like [Frenkie] De Jong," Koeman said about his captain. "They'd played everything with Barcelona and their national team.

"They couldn't go on like that and that's why we left them at home. I hope they're fresh and have energy against Osasuna."

Away from the pitch, Barcelona's players and staff have recently agreed terms on a second pay cut.

"We have to look at the club's financial situation," Koeman said. "We have to help it, out of love for this club. I'm ready to help.

"It's also good that the players have reached an agreement. We have to think about what's best for Barcelona."

"[The death of] Maradona has affected us, especially the Argentines," Koeman admitted. "Not even we can imagine how much he meant to them. But it has the effect of motivating you to give your best on the pitch.

"I played against him once. I was left watching him in the warm-up. He was the best in the world. We enjoyed his ability. I was lucky enough to play against him and see his ability."