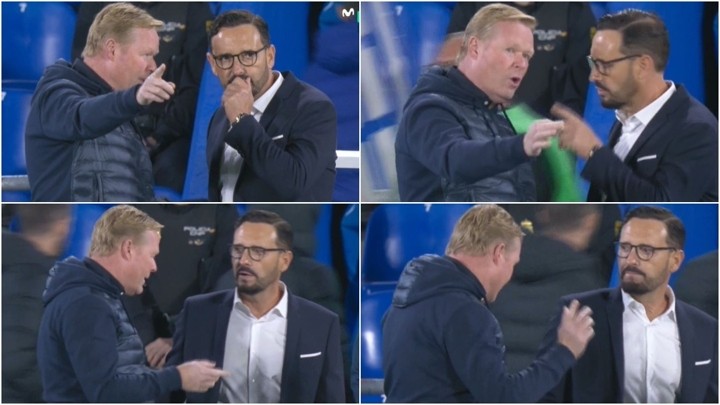 As Barcelona's first defeat of the LaLiga Santander season was confirmed when the final whistle was blown at the Estadio Coliseum Alfonso Perez, Ronald Koeman made a point of speaking to Getafe coach Jose Bordalas about the lack of respect he felt from Getafe players.

In the video, the Barcelona coach can be shown shaking his finger and then refuses to shake hands, although it's unclear if they had already done so, as he was visibly angry having previously exchanged words with Allan Nyom.

"I told him that Nyom, the No. 12, has shown a lack of respect, he insulted me, he said two or three very ugly things which I won't repeat," Koeman explained in his post-match press conference.

"I told him to talk to the player, I don't think that's how we should behave."

During the game, the two clashed and crossed words on the sideline but the content of the conversation has not been revealed.

Nyom was also caught on camera clashing with Ansu Fati, accusing the teenager of diving while he was down on the turf, eventually being separated.

Late on in the game, a ball was thrown onto the field from the Getafe bench and one of the Getafe coaches were sent off.

Barcelona were visibly uncomfortable and even annoyed by Getafe's approach, with several hard tackles, including an elbow from Nyom on Lionel Messi and a stamp by Erick Cabaco on Pedri.

Mata was the man who would score the winner as Frenkie de Jong conceded a clumsy penalty which the former Real Valladolid centre forward duly converted from the spot just before the hour mark.