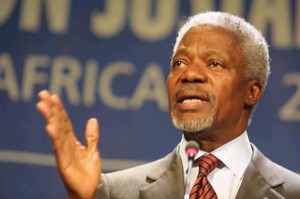 Heartbroken â€“ thatâ€™s how you must have felt at the end of your epic match against Uruguay last Friday. There is no other word for it. Hundreds of millions of us felt the same way like Kofi Annan, the former UN Secretary General.

Heartbroken â€“ thatâ€™s how you must have felt at the end of your epic match against Uruguay last Friday. There is no other word for it. Hundreds of millions of us felt the same way.

For a moment, my reaction to those last minutes of drama was â€œhow unfairâ€. But in fact, while you lost the game, you came out winners. I wanted to congratulate you not only on a fantastic performance in which you can take great pride, but also for accepting your defeat with dignity. You won because you were such great ambassadors for the game â€“ and for Africa.

I cannot think of another occasion on which the whole continent was so united as during your quarterfinal. â€œBaGhana BaGhanaâ€ replaced â€œBafana, Bafanaâ€ for our South African hosts, and I am sure I could hear the earth shake when Muntari scored â€“ a mighty roar went up from Cairo to Cape Town, Dakar to Dar es Salam â€“ even the deafening Vuvuzelas couldnâ€™t match it. This thunderous solidarity is a tribute to you all, and a great omen for Africa, which is so often depicted as divided and conflicted. You won because you brought us all together.

Crucially, this unity went far beyond the shores of our continent. Millions of non-Africans cheered for you, too, something that would have been unthinkable a few decades ago. I am sure, we have all felt at some stage of our lives that the world is united against Africa. But this World Cup, and particularly your last match, has shown the enormous goodwill towards our continent. You won â€“ we all won - because you opened so many hearts and eyes.

The lasting trophy to take away from the tournament is this incredible moment of unity. I wish we could preserve it and invoke it more broadly for the development and wellbeing of the continent. There is no reason why we should wait another four years for another moment of solidarity; we can draw upon what you have created, now.

Chair of the Africa Progress Panel