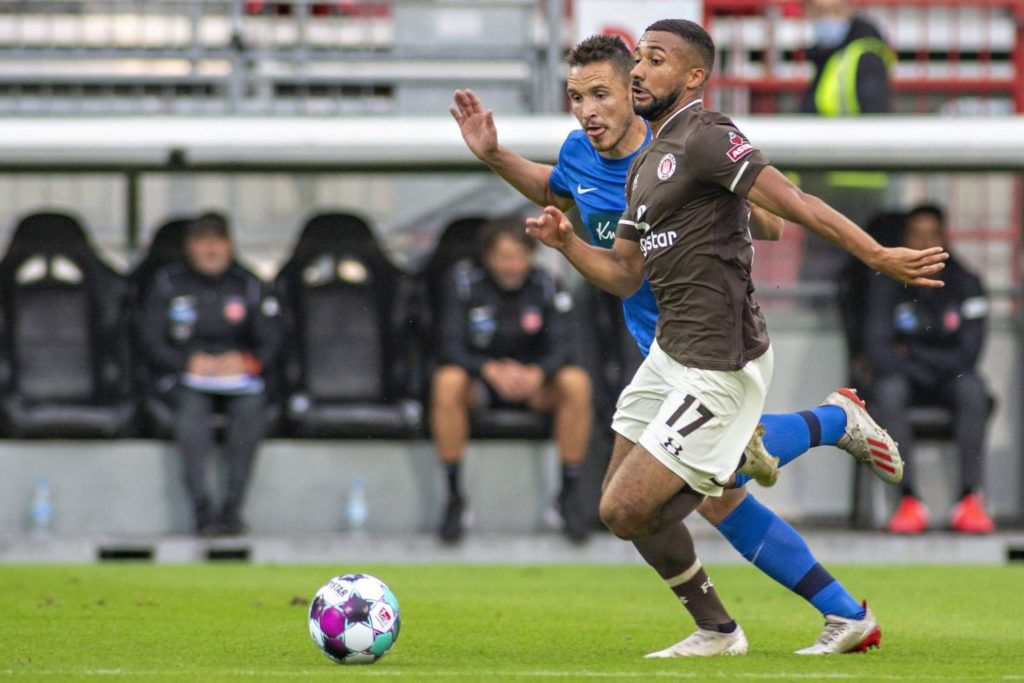 When a new season starts with a training camp for the entire crew of a football team, then it is good form for the new players to be ready to sing their vocal talents on stage at one of the evening gatherings.

This is the moment in this ritual of football, in which it could happen more and more frequently that even superstar scout Dieter Bohlen would be mega-surprised.

One of those who are most sincerely spoken of on this matter is Daniel-Kofi Kyereh. His “Oh Happy Day”, as they say between Millerntor and Wiesbaden, is artistically amazing and definitely worth experiencing.

Kofi's singing gets under your skin" , reports Christian Benbennek, for example. He was trainer at TSV Havelse in the Regionalliga Nord Kyerehs and before that, as a trainer at VfL Wolfsburg, he had to do a lot to reconcile the love of music of these young people with football training at the academy there.

This “Oh Happy Day”, which Daniel-Kofi Kyereh knows how to sing about so brilliantly, has now of course been brought into his world of football by the interpreter. In the last minute draw a week ago in Bochum, he made this furious 2-2 possible with his two goals.

And now at the home premiere at Hamburg's Millerntor, Kyereh has the 1-0 up to then confidently played with his bang 1. FC Heidenheim put into a kind of paralysis, from which one could only recover halfway after three more Pauli hits.

He steps out of Schäffler's shadow

Admittedly, Daniel-Kofi Kyereh was able to draw attention to himself at SV Wehen Wiesbaden as a fast dribbler and determined shooter in the previous season. Yes, after 28 appearances there in the 2nd Bundesliga, there were eight goals and six assists. But the bottom line is that he rarely emerged from the broad shadow that his storm colleague Manuel Schäffler had inevitably produced with his 19 goals this season.

And at the end of the way, relegation from this division could not be avoided. Even after two personally hopeful seasons for the SVWW, Daniel-Kofi Kyereh's commitment remained a vision for many decision-makers in the world of professional football, which had to be accompanied by a lot of imagination to follow.

Timo Schultz and Andreas Bornemann, the makers of football at Millerntor, have applied this witty vision. They are currently receiving a lot of praise for their creativity in the new personnel structure. Because it is perhaps the biggest highlight of the day, how Kyereh turned this challenge against Heidenheim around with his torpedo hit.

When Rico Benatelli gave him the ball around ten meters from the penalty area, a goal-scoring action emerged that can only be brought onto the field by someone who currently has great potential for self-confidence and is full of positive energies to hunt for goals .

So when the new Kiezkicker with the jersey no. 17 received the ball, suddenly seemed to ignite a kind of turbo: acceptance, take-away, conclusion - all of this at the highest speed, greater dynamism and the highest precision. At the very bottom left the ball hit the Heidenheim case and everything went so incredibly quickly that Heidenheim's goalkeeper Kevin Müller looked as if he hadn't understood what had just happened to him.

The soccer teacher Christian Benbennek only saw this action by his former protégé in a TV cut late in the evening. After all, he was initially angry about the missed victory of his current team, this is Dynamo Berlin, in the Regionalliga Nordost. But then he immediately woke up some memories of two seasons together at TSV Havelse.

And so Christian Benbennek reports in an interview with Liga-Zwei.de, amused: “Kofi always wanted to be like Cristiano Ronaldo. So penetrate from the far left to the center and then shoot at the goal. But I never stopped to make him understand that the way to the goal is shorter for him from the attack center and that he can be even more dangerous from there. "

It is thanks to Benbennek's perseverance that Kyereh accepted this crucial change of position at some point. Also, the fact that the coach in the Havelse after-work project was often available for his ambitious attacker in the afternoon for individual special training, Daniel Kofi-Kyereh becomes the new hope in the FC storm while enjoying the current developmentSt. Pauli have by no means forgotten.

“It took Kofi a long time, but he never gave up believing in the big dream. He wanted to become a professional and has never let himself be dissuaded from this goal, ” says Benbennek. Keyereh spent four seasons at TSV Havelse. So two more than Benbennek, who had long since moved to SV Ried in Austria and then to Alemannia Aachen in order to be able to work under fully professional conditions.

The coach admits: "Actually, it seemed as though Kofi missed the jump into professional football." Error. Because in 2018 Kyereh Wiesbaden's coach Rüdiger Rehm convinced in training tests and so he was accepted as a late discoverer and was now allowed to storm where he also earned money by scoring goals: first through the 3rd division, then up to the 2nd Bundesliga.

And now Daniel-Kofi Kyereh is in the limelight and also impresses his trainer Christian Benbennek. “Kofi has improved a lot. He worked physically on the most important muscles, increased his dynamism and he is also one of the few real two-footed shooters I know, " says Benbennek, describing the most significant changes in the performance repertoire of the cheeky Pauli striker.

Both feet dangerous for goals

The fact that Daniel-Kofi Kyereh is actually a trained right-footer by nature is probably one of the biggest surprises that the sky-striker from the neighborhood can currently come up with. When the former Pauli striker Martin Driller listed Kyereh's abilities with admiration in a studio talk with the Sky presenter Yannick Erkenbrecher as an expert with a scorer's past, he remarked with conviction: "It's great that Pauli is now storming such a powerful left-footer."

Well, luckily Daniel-Kofi Kyereh can do it equally well with the right and the left. And this is also worth a spectacular somersault. Backwards from a standing position. With the body control of an artistic gymnast. Yes, "Oh Happy Day" at the Millerntor ...