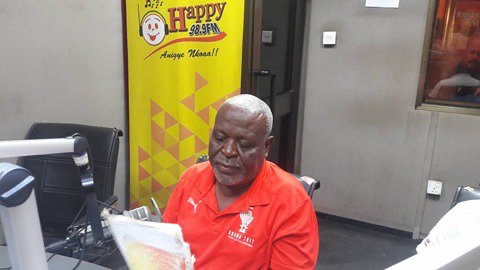 Veteran football administrator Kofi Manu, popularly known as 'Blue Boy', has waded into the ongoing debate of the five-year ban of Division One side Phar Rangers.

On Wednesday, the Ghana Football Association banned Phar Rangers from all football-related activities for five years after deciding to withdraw from all sanctioned football competitions.

The decision did not go down well with the GFA whose Disciplinary Committee went ahead to apply the laws of the game as written in the constitution of the federation.

According to Article 13(3) of the GFA Division One League Regulations all directors of a club will be banned from all football activities for five years if their clubs pull out of GFA orgnisazed competitions without a just cause while the club will suffer a ban.

"That the Shareholders and Directors of Phar Rangers FC on the records are hereby also banned from all football activities for a period of five (5) years effective from this 2020/2021 football season in accordance with Article 13(3) of the GFA Division One League Regulations," the ruling from the Disciplinary Committee of the GFA read on Wednesday.

However Manu, who is claims he is well-versed with the rules of the game in Ghana, said the GFA's charge is bogus and pure witch hunt.

"The ruling of the Disciplinary Committee of the GFA against Phar Rangers is hollow, bogus, and nothing short of witch-hunting," said the veteran football administrator on Opemsuo FM.

The decision means the owner of Phar Rangers and now Chief Executive Officer of Asante Kotoko will be affected by the ban.

All players of Phar Rangers by the decision are now free agents and will have to find new clubs.

Phar Rangers announced their decision to pull out of the Division One League early this month as well as withdrawing from all GFA Competitions with immediate effect.

In the said letter, dated June 7, 2021, the Club stated that it should be considered as defunct henceforth which pormpted the Disciplinary Committee to activate the appropriate provisions in the GFA Rules & Regulations relating to withdrawals.

The Disciplinary Committee delibrated the matter before coming to the conclusion that all provisions of the GFA regulations must be enforced including banning their directors for five years.

If Amponsah is not satisfied with the decision of the Appeals Committee he can go to the Court of Arbitration for Sport (CAS) in Switzerland to have his case heard.

But he will vacate his position as the CEO of Kotoko if he wants to fight the decision unless he places a stay of execution order on the GFA to prevent them from enforcing the decision of the Disciplinary Committee.

Phar Rangers have also been banned from playing in any competition in Ghana for five years and they will be relegated to lowest tier of Ghana football on their return after the ban expires.