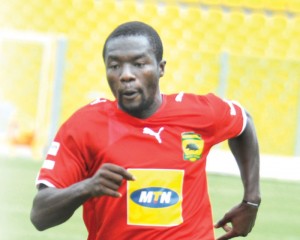 Ex-Kotoko striker Kofi Nti Boakye has decided to offer the club an amount of $75,000 as a gift in the wake of the Porcupine Warriors' fury over the decision to sign for Libyan side Al Ahly Tripoli as a free agent.

The offer comes after Kotoko decided to report the striker to FIFA following his decision to sign for Al Ahli when he had three days left on his contract with the Ghanaian club.

Kotoko believe they should have earned money from the US$900,000 the Â Libyan side, Al Ahly Tripoli is reported to have paid to the striker for his services.

Nti Boakye is reported to have earned $900,000 in the deal which also covers his enticement fee plus what the agents involved will earn.

Kumasi Asante Kotoko has written to the Ghana FA to register their displeasure about the transfer and also requesting a chunk amount from the transfer.

But some media outlets in Ghana say Kotokoâ€™s pursuit will yield nothing.

Sources say the strikerâ€™s contract will the club expired on August 9 and his deal with the Libyan club officially takes effect from August 10, 2013.

Due to the turn of events, the striker himself has decided to offer the Ghana League champions $75,000 on his own will as a way of thanking the club for their support during his 18-month stint.