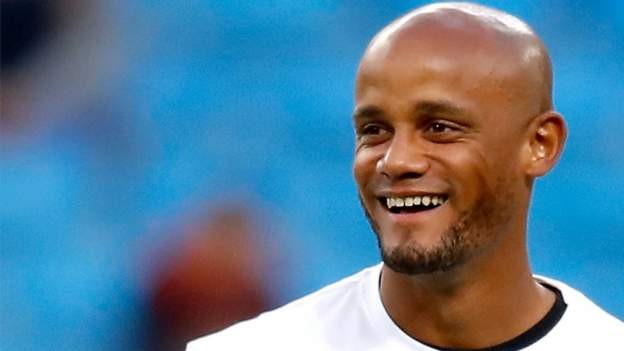 Vincent Kompany's first Championship game in charge of Burnley will be at Huddersfield Town in the opening match of the season on Friday, 29 July.

Watford and Norwich City, relegated from the Premier League alongside Burnley last term, start their campaigns against Sheffield United and Cardiff City respectively.

The campaign also includes a mid-season break for the World Cup in Qatar.

There will be no second tier games in England after the weekend of 12/13 November until 10 December because of the tournament in the Gulf state.

The pause in Championship fixtures covers the group stage and opening round of knockout fixtures of the World Cup.

The opening round of games in the second division are spread over four days, starting with Burnley's trip to the John Smith's Stadium to face a Terriers side that missed out on a Premier League return last month after being beaten by Nottingham Forest in the Championship play-off final.

Norwich's trip to Cardiff on Saturday, 30 July is one of nine fixtures that day, while Coventry's game against Sunderland, who return to the Championship after winning last season's League One play-off final, is scheduled for the following day.

First round of fixtures in full

Kompany, who guided Anderlecht to a third-place finish in Belgium's top-flight last season, will be looking to return the Clarets to the Premier League at the first attempt.

The former Manchester City captain has returned to the English game as a permanent successor to Sean Dyche at Turf Moor, with Mike Jackson previously filling the role on an interim basis.

Burnley's first season back in the Championship since going up as title winners in 2016 gets off to a difficult start, with the trip to Huddersfield followed by a home game against Luton Town - another side that reached last season's play-offs - before facing fellow relegated Premier League side Watford in the third week of the season.

Norwich are back in the Championship after another one-season top-flight stay, having twice finished bottom of the Premier League in the previous three seasons after going up as Championship title winners.

After a trip to the Welsh capital first up, the Canaries host League One title winners Wigan Athletic, who are back in the Championship after a two-year absence - with their relegation in 2020 the result of a 12-point deduction after going into administration.

Watford return to the second division with a new manager at the helm, with Rob Edwards taking charge of the relegated side after last season guiding Forest Green Rovers to the League Two title.

Sunderland return to the second tier for the first time since 2018, when a second successive relegation - after dropping out of the Premier League 12 months earlier - condemned them to what would be a four-year exile in League One.

After Coventry head to the Stadium of Light first up, the Sky Blues then take on another promoted side in the second week with a home game against League One runners-up Rotherham.

Elsewhere, Michael Appleton begins his second spell as Blackpool boss against Reading more than nine years after his last game in charge of the Seasiders.

That match will be Paul Ince's first league game since being confirmed as permanent boss of the Royals at the end of last season.

The former England international guided Reading to safety last term, overseeing four wins and three draws in his first 11 games after being placed in interim charge in February.

Meanwhile, Blackburn Rovers begin Championship life under Jon Dahl Tomasson by hosting a Queens Park Rangers side who have a new boss of their own in Michael Beale.