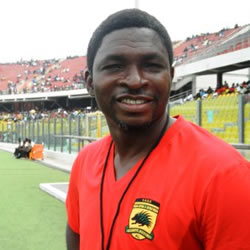 Konadu, who is Kotoko's head coach, was appointed the Black Stars assistant coach on Thursday following a recommendation from new coach Kwesi Appiah.

The GFAâ€™s decision to allow Konadu to hold onto his position as Kumasi Asante Kotoko coach has suffered some criticisms.

The management of Kotoko wants to maintain the man who has led them to their first premier league title in four years this season.

But there are concerns that he might not be effective in combining the two pressure jobs.

But Afriyie, who doubles as an emergency committee member of the GFA, says Konadu can manage it professionally.

â€œMaxwell himself has told us that he can manage the two jobs and that is the most important thing,â€ Afriyie said.

â€œI donâ€™t see any conflict in handling the two jobs it depends on how you approach it and I believe if you are you van do it.â€

The Football Association confirmed the Kotoko coach as assistant to Kwasi Appiah on Thursday.