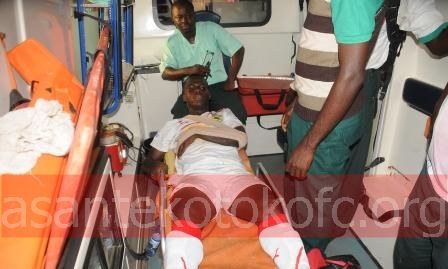 Toure was rushed to the Komfo Anokye Teaching Hospital after the Kotoko's 1-0 defeat in Bekwai.

Toure went for an aerial challenge, fell on the left shoulder and complained of severe pains.

But the Kotoko's top scorer is unlikely to remain in the infirmary for long after x-rays and scans conducted on the player indicated no major danger.

"There are no broken bones, only a disturbance of the muscle hence the severe pain Toure is suffering," Kotoko team doctor Kwaku Boateng told the club's official newspaper.

"He will surely overcome the pain after a day or two. In the mean time, we are monitoring him, just in case."