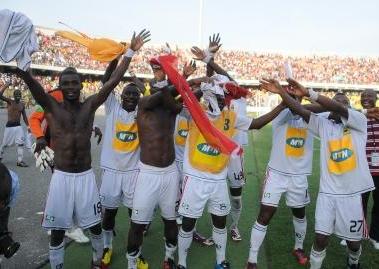 Prince Anokye returned to his former employers and impressed in the first half.

Both sides were poised to scrap all three points but it was Berekum Chelsea, the visitors, who played with unified purpose in the opening minutes.

Emmanuel Clottey skipped past three Kotoko defenders before firing a stinging but missed the target by just inches away.

The Ivorian fired a glorious shot which sailed over Ernest Sowah's crossbar.

Plyum's side took charge of midfield but were unable to make use of the any of the opportunities that came their way.

Kotoko returned from the recess with a new sense of urgency as Michael Akuffo hummed to life in midfield.

Chelsea's Solomon Asante had very little impact to make as he was replaced.

The former Wa All Stars striker appeared in a position to score when the Black Stars hopeful blocked him.

Referee Joseph Lamptey pointed to spot with Chelsea having little complains to make.

Akuffo elected himself to dart home the winner with an expertly taken low grounder to the right side and Sowah diving to the left.

Substitute Musa Mohammed tried to pull a chestnut out of the blazing fire with speculative shot on the 85th minute.

Kotoko are now three points richer than arch-rivals Hearts of Oak who are in second place with 21 points.