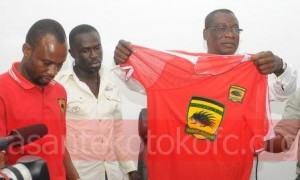 Asante Kotoko have officially launched replica jerseys and other paraphernalia for the the new season.

The club also announced that they will begin to sell Loafer shoes.

Executive Chairman Dr KK Sarpong says the move is one of the many ventures the club has put in place to generate needed revenue.

''If anything at all, I expect fans to have at least the Home and Away replica shirts so that they properly identify with the team when we play at home and also go away for matches.

''I want at this point to crave the indulgence of Kotoko supporters to ask that as from our next match which happens to be the first leg of the MTN Super Two Cup match against Hearts at the Baba Yara Stadium on coming Sunday, we all be attired in the replica shirts and also fly the beautiful Kotoko flags at the stadium.''

''It is not a bad idea for Kotoko supporters to now see the various Kotoko shirts as the official uniforms for use when attending Kotoko matches.''