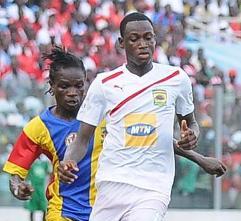 Officials of Asante Kotoko admit the clubâ€™s off-field troubles are having an adverse effect teamâ€™s performance during games.

The Premier League leaders came within seconds of slumping to their first home defeat of the season on Sunday against New Edubiase.

It however took an injury time goal by defender Baba Abdul-Rahman to cancel out a 4th minute Emmanuel Baffour strike.

The club was on Monday hit with news of a fresh setback after being told by Fifa to pay a 30,000 Euro fine to Real Republicans in solidarity mecjanism following the transfer of Shilla Illiasu in to Russian club Saturn FC in 2006.

It comes on the heels of a whooping 99,000 Euro debt to be paid to former coach Han Dieter Schmidt for his wrongful dismissal in 2005.

It is also to pay $6,500 in refunds to Turkish side Gencelrbirligi following the transfer of Adamu Mohammed back in 2008.

Kotoko in both instances incurred an extra combined cost of 12,000 Swiss Francs in legal charges.

And the clubâ€™s Public and Supporter Relations Manager Listowell Bukarson told GHANAsoccernet.com the teamâ€™s disappointing showing is as a result of the torrid administrative week they have had.

â€œWe can directly relate the teamâ€™s performance against Edubiase to the clubâ€™s off-field issues,â€ he said.

â€œThe performances aside the suspension of our coach (Maxwell Konadu) was very bad and it was very evident the lack of concentration on the part of our boys.

â€œThe players feel monies meant to be given to them in wages and other bonuses will be used to service debts.

â€œBut we have assured them they will be well taken care off during this difficult period but as human as they are things like this will get to them but I am sure we will do well to manage the situation.â€

Kotoko however still maintain a healthy eight-point lead with eight games left to run in their quest to win their 22nd league title.