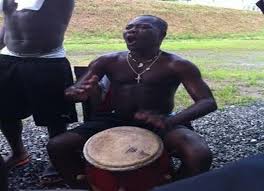 The Chairman insists that the Kpalogo songs orchestrated by Langerbel invoked the gods of the Volta to stand up against the Porcupine Warriors.

Langerbel, a known Great Olympics supporter was spotted at Sogakope drumming and supporting the Kumasi-based club in their 2-0 opening day defeat.

According to reports, Langerbel was hired by one of the club’s staunch supporter Kennedy Agyapong [Capocinno] to play that role on the day.

But the board member of the dethroned league champions has blamed the Black Stars chief drummer for the 2-0 loss suffered at the hands of the Academy lads in the opening fixture of the 2016 Ghana Premier League.

”Langabel’s inclusion is a worry to the circles especially those in Nima and the Greater Accra Regional Circles Council.

They were very furious and they confronted me after the game.“

“Yesterday I called Opoku Nti about the decision and he told me he is not aware of the decision. But the Greater Accra Regional Circles Council has started investigations into the inclusion of Langabel in our supporters base,” Kwaku Amponsah told Kumasi-based Nhyira FM

“Langabel is not a Kotoko supporter, the ‘KPALOGO’ he sang trigged the gods in Volta Region which resulted in our defeat against WAFA over the Weekend, he added