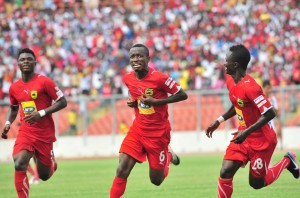 The Premier League Board has moved Asante Kotoko's week six home fixture against Hasaacas to 16 October due to the World Cup playoff against Egypt at the Baba Yara Stadium.

The defending were originally scheduled to host the Sekondi-based side at the venue on 13 October.

With the crucial World Cup qualifier fixed for 15 October, officials have decided to postpone the league match.

"We met today (Tuesday) at the Ghana Football Association and we have taken some decisions," PLB chairman Abra-Appiah told Footy Ghana.

"As discussed in the meeting the match day 6 fixture between Kumasi Asante Kotoko and Hasaacas has been postponed to the 16th of next month to give enough room for both the Black Stars and the Pharaohs to train at the Baba Yara Sports Stadium.

"If they play the game on Sunday it means that one of the teams cannot use the stadium so we have decided to move it to the 16th of October."

Meanwhile all other Ghana Premier League Week Six matches will be honoured on 13 October.