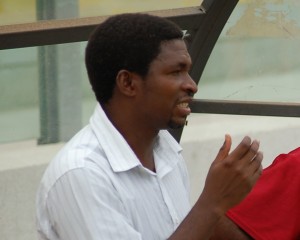 Asante Kotoko coach Maxwell Konadu has conceded his team did not do enough to merit a win against New Edubiase.

The Porcupine Warriors suffered their first defeat of the season on Wednesday in Berkwai amidst allegations of harsh treatment by the home side and unfair officiating.

But the ex Ghana striker who succeeded Bogdan Korak as Kotokoâ€™s coach at the beginning of the campaign insists his team produced a below par performance hence the defeat.

â€œI have heard several interpretations to our defeat against Edubiase but Iâ€™d say we didnâ€™t play well enough,â€ he told Accra-based Hot FM.

â€œI want to congratulate Edubiase, they played very well and deserved the win so I take the defeat in good fate.

â€œWe now have to move ahead and work towards our next game against Dwarfs.â€

Despite the loss, Kotoko maintained their stewardship of the Premier League as close contenders; Berekum Chelsea and Hearts of Oak all failed to capitalize on Kotoko's stumble of which Konadu is at least relieved of.

"We lost but somehow due to results elsewhere we still find ourselves on top of the Premier League which is at least a consolation but we have to pick it up from there," he said.

The trio are now all pegged at eighteen points each but Kotoko leads due to their superior goal difference ahead of the week 10 fixtures this weekend.