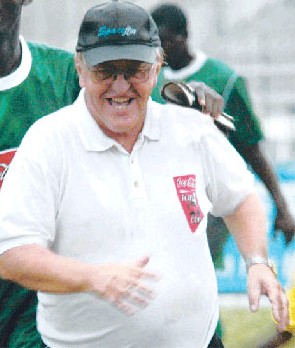 Fifa has ordered Asante Kotoko to pay a whooping â‚¬99,000 to former coach Hans Dieter Schmidt within the next 30-days or risk being relegated to Division Two, GHANAsoccernet.com can exclusively reveal.

The German coach went to Fifa after he was sacked in 2005 without his entitled compensation.

And after seven years of back-and-forth, Fifa has ruled in the 64-year-oldâ€™s favour.

The Kumasi-based club also incurs an 11,000 Swiss Francs cost in legal charges over the period.

The clubâ€™s management who are devastated by this news say they are looking at all options despite conceding it looks daunting.

â€œOur disappointed emanates from the poor management and administration in 2005 under which this huge liability which would certainly plunge the club in further debt was incurred.

â€œThis is the time we need our beloved supporters more to help us in these trying times as we take steps to address the situation.â€

Schmidt was dismissed in 2005 after a string of poor results and aÂ perceivedÂ spat with management led at the time by veteran administrator Maj. Yaw Larson.