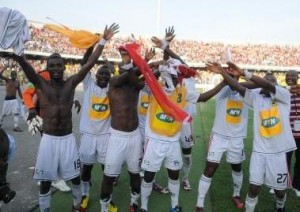 Asante Kotoko preserved their four point lead at the top after dismissing Medeama 1-0 on Sunday in Sekondi.

Ben Acheampong headed home the winner on 45 minutes to hand the Porcupine Warriors a deserved win.

Acheampong connected a corner-kick in a match which Kotoko dominated and could have scored more.

Rivals Hearts of Oak needed a Mahatma Otoo prolific strike to seal a 1-0 win at Heart of Lions to keep the pace on the leaders.

AshantiGold survived an Emmanuel Baffour opener to nick a 2-1 win at the Len Clay Sports Stadium against New Edubiase United thanks to goals from Didier Kore and Latif Mohammed.

Ebusua Dwarfs handed Tema Youth their worst defeat at the Tema Park by posting a 3-0 win.

Eric Opoku and a double from captain Bismark Asiedu were on target for Professor Kwesi Mintahâ€™s side.

Wassaman picked up the points at the Bechem Park in a 1-0 win over Bechem United on Godbless Asamoah goal.

Berekum Arsenal moved to the bottom of the table following a 0-0 draw with Mighty Jets at the Golden City Park.