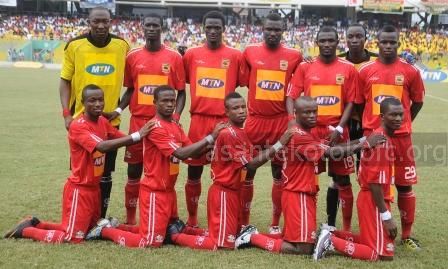 Kotoko returned to the top of the Ghana league table thanks their hard-fought 1-0 win over Mighty Jets in Kumasi on Wednesday.Â

Nafui Iddrisu came off the bench to rescue all three points for the Porcupines who needed the 90th minute strike to edge past the stubborn Accra side.

Iddrisu, who has enjoyed virtually no playing time this season, scored to help Kotoko maintain their 100% home record.

Kotokoâ€™s move to the top of the league was aided by Heartsâ€™ first defeat of the season they were beaten by ten-man Dwarfs in Wednesdayâ€™s game.

Kotoko displayed their dominance in midfield with Michael Akuffo, Michael Mensah and Daniel Nii Adjei pulling the strings but Ahmed Toureâ€™s speculative shot from 25 yards failed to find the target.

Jets threatened on several occasions but midfielder Muntari Tamimuâ€™s low drive from inside of the box did not create any problems for Soulama Abdulai, the Burkinabe goalkeeper.

The brightest chances of the first half fell to Jets star Jacob Kwaw. The 20-year-old was played through but he surprisingly arrowed his drive wide.

Jets left Kotoko off the hook on 35 minutes. Inusah Musah chipped in a free kick the edge of the Kotoko box but Muntari headed wide.

Ahmed Toure's penalty appeal was controversially ignored by the referee after the Ivorian striker was pulled inside the box which turned out to be a tough game until late when Iddrisu crashed home the winner.

Follow some of the Ghana match reports via this link