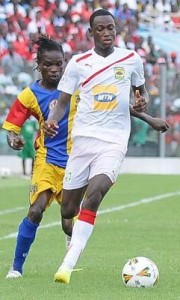 Kotoko confirmed their title credentials as they fought back from behind with a late, late equaliser by drawing 1-1 with New Edubiase in Kumasi on Sunday.

The injury time equaliser from talented defender Baba Abdul Rahman helped the Porcupine Warriors to stay at the top of the Glo Premier League.

The nature of the victory shows the character of the side ready to win the league as the player never gave up with seconds to end the game.

Despite earning a share of the spoils, Kotoko have now seen their lead cut to 8 points after AshantiGold won at home.

The league's top scorer, Emmanuel Baffour drew first blood for the visitors after three minutes into the start of the game to take his tally to 17 in 22 games.

Kotoko endured a frustrating afternoon as coach Maxwell Konadu, who begun a two-game touchline ban watched from the stands.

As the clocked ticked, fans of Kotoko started filing out of the grounds with defeat almost certain.

Edubiase appeared to be coasting towards victory until Abdul Rahman fired in from a corner kick to save their blushes three minutes into injury time.

The result appeared like victory for Kotoko as players of Edubiase protested against the goal which resulted in some cards for the visiting players.