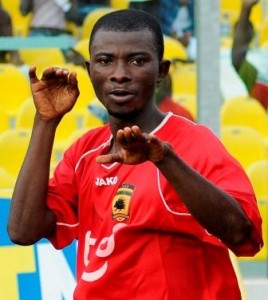 Asante Kotoko did not register midfielder Jordan Opoku for next season, GHANAsoccernet.com can confirm.

The player stalled the move to be registered this season in protest of unpaid allowances since his return to the club.

The ex-Fetteh Feyernord enforcer returned to the club at the end of last season following the expiration of a four-month loan deal at Albanian side Dinamo Tirana.

Opoku was handed the Kotoko armband under the short tenure of coach Ebo Mends for his work ethic and discipline early this season.

He was a member of Ghana's squad that won silver at the maiden CHAN tournament in Ivory Coast in 2009.

Defender Louis Quainoo also refused to renew his contract with the club and will not play any part this season.