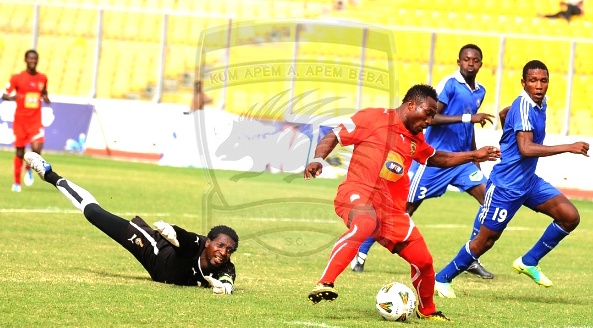 Asante Kotoko striker Ben Acheampong has taunted rivals Hearts of Oak ahead of the big Ghanaian derby on April 15.

The Premier League leaders stand the chance of sealing their 22nd title against their arch rivals in front of a prospectively packed Baba Yara Stadium in Kumasi.

Hearts of Oak on the other hand have only won once in six games and a currently in free fall on the league log.

Not even the appointment of C.K Akunnor as coach was able to halt the massive decline of the Phobians as they were dealt a painful 1-0 defeat by city rivals Liberty Professionals last Sunday.

And to add more salt to their wounds, Kotoko's striking sensation Acheampong claims playing Hearts of Oak now is equivalent to playing a 'Monday Stars' game (a regular weekly game plaid in several localities for fun).

"I have never lost a game when playing against Hearts," the ex All Stars player told Kumasi-based Angel FM.

"Playing Hearts is like playing in the Monday Stars so there is no pressure at all.

"I go into every game with the aim of scoring and I know their (Hearts) defenders will huff and puff but at the end of the day i will get my goal."

Build up towards the epic week 24 game is gathering momentum especially in Kumasi (Kotoko's stronghold) where numerous radio stations and other media outlets are whipping up excitements towards what promises to be a very good game of football with the quality players to paraded by both sides.