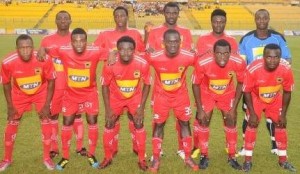 Asante Kotoko will play a routine friendly against second-tier Starke FC on Sunday ahead of the resumption of the Ghana Premier League next Sunday.

The club have been engaged in series of low-profile friendly matches to trim the rough edges as they attempt to snatch the Premier League title from mega-spenders Berekum Chelsea.

The match against the lower-tier side will afford interim boss Osafo Castro the opportunity to assess new signings including Michael Helegbe and players on the fringes.

The club have played matches in Bechem, Akim Oda and Mankessim during the league break.

The last time match played between the two sides ended 1-0 in Kotoko's favour.