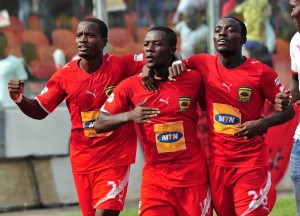 Asante Kotoko clinched a record 22nd Ghana Premier League title after a 0-0 draw with Berekum Arsenal at the Baba Yara Stadium on Sunday with four matches to spare.

The Porcupine Warriors are 15 points ahead of their title chasers AshantiGold who suffered a 3-1 defeat at Liberty.

Kotoko looked like steamrolling their opponents in the first ten minutes with a wave of unrelenting attacks but the Arsenal defence stood resolute to see out this phase of the game.

Striker Ahmed Toure during the impressive phase of Kotoko missed a sitter after failing to connect with a Yaw Frimpong cross.

Arsenal however came closest to scoring against the run of play in the 24th minute when midfielder Richard Yeboah had to clear Razak Agyir's strike off the line.

It was the morale booster the visistors needed as they grew in confidence to dictate the pace of play for the next ten minutes.

Chances then came few and wide in between as both sides looked to have canceled each other as the game approached half time.

The game was however brought back to life in the 40th minute as a Michael Akuffo power driver off a free kick was expertly saved by goalkeeper Mutawakilu Rashid in the Arsenal post.

It proved to be the last piece of meaningful action as the match went into recess goalless.

Kotoko began the second half on the same way they started the first with Nafiu Iddrisu coming close to breaking the deadlock.

His strike in the 46th minute however bounced off the post after a wicked deflection on its way.

Arsenal responded four minutes later with a chance of their own but Joseph Masel's effort went wide for a Kotoko goal kick.

Both sides made a couple of substitutions but it did little to change the scoreline as the match got cagier with Kotoko just shading it.

Kotoko almost snatched the win on the stroke of full time after substitute Daniel Nii Adjei's shot was saved by the impressive goalkeeper Mutawakilu Rashid to ensure Arsenal came away with a vital point from the Baba Yara Stadium.