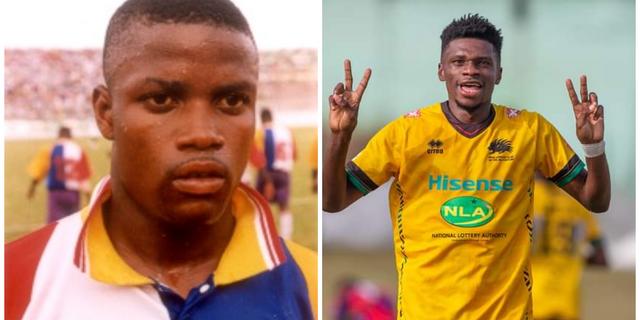 Etouga’s feat in the 2021-2022 season is on the verge of breaking Ishmael Addo’s 20-year-old record of 22 goals in a single Premier League season. Comparisons have however been drawn between him and the Hearts of Oak Legend.

According to the Amankwah Mireku, he sees no cause for such discussions in the league history. He indicated that Etouga can only be compared to Ishmael Addo when he clocks the goal king on consecutive seasons.

In an interview with eTV Ghana’s Herbert Boakye-Yiadom on the “Inside The Ghana Premier League” sports show, he shared, “I don't see any competition in there between Ishmael Addo and Etouga. Strikers are obviously noted for scoring goals and Ishamel Addo has won the goal king for three consecutive times.

“So I don't understand why the discussion or comparison between the two has to come up. For me there's no competition or whatsoever between them. I don't know the purpose for this discussion or why it should even start in the first place but let's do better. Both Yaw Annor and Etouga have proved to be outstanding this season and on the verge to break the 22 goals a season record. But until they get there and do that consecutively like Ismael Addo then we can start the comparison but for now there's none between either.”

The ace defender further opined that the argument of playing with a better crop of players is misleading. In his view, “It's not always about the players you're playing with. We've had some strikers play along great midfielders but they failed to make it as top scorers. You can have all the greats but if you fail to convert the chances to goals then you can't be regarded as a top striker.”

Etouga is currently the leading goal scorer of the 2021/2022 Ghana Premier League with 21 goals, a goal-shy to Ishmael Addo’s long-standing record. He faces competition from Yaw Annor of Ashanti Gold who has 20 goals this season.