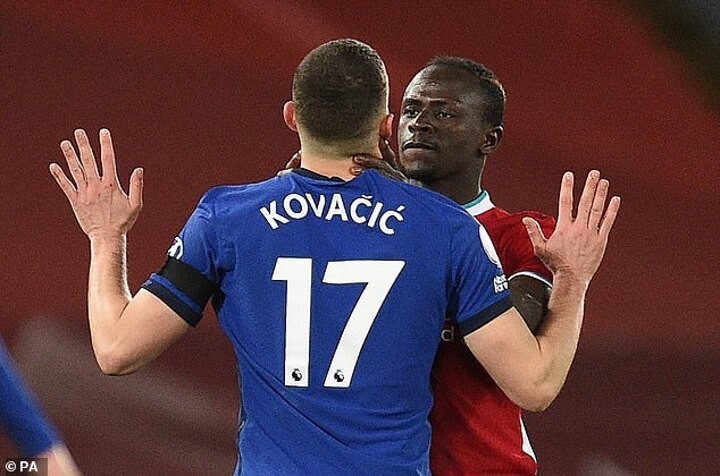 Mateo Kovacic was angrily confronted by Sadio Mane after the Croatian booted the ball at his head while he was down on the turf during Chelsea's 1-0 win over Liverpool.

Thomas Tuchel's men were on the way to inflicting a fifth-straight home defeat on Liverpool when the incident occurred.

After being shoved to the ground by Antonio Rudiger, Mane slid on the turf before having the ball thumped against his head at close range by Kovacic, which saw the Senegalese forward instantly confront him.

With Mane in his face, Kovacic appeared to laugh off the incident while a furious-looking Mane put his hands on the Croatian's neck before the two were separated in the heated exchange.

It was just another incident that compiled more misery on the Reds, who couldn't prevent a fifth-straight defeat at Anfield – the first time it has happened in Liverpool's history.

Mason Mount was the Blues hero having scored the game's only goal, firing home a superb individual strike late in the first half to extend the club's unbeaten run under boss Tuchel to 10 games.

The win for Chelsea sees them leapfrog Everton into fourth while Liverpool remain seventh – four points adrift of the Champions League places and currently in free fall.

Following the win, Tuchel hailed his 'courageous' side.

He told Sky Sports: 'We played with courage, had excellent moments with the ball, had moments we needed to suffer, never lost the attitude and desire and a deserved win and big performance.

'It was a very good team performance. They ask you a lot of questions and we need to have the answers.

'Everyone was very brave and everyone was sharp. It is a six-point game because the others lose. The race is on, there are still 11 games to go. We go step by step. We can never rest and never celebrate, there is no time.'