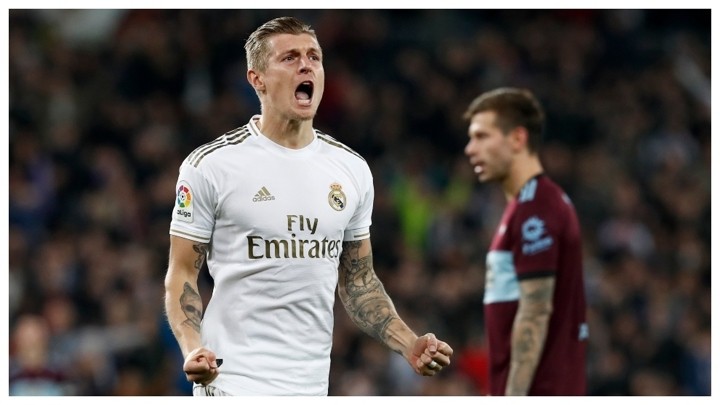 Real Madrid midfielder Toni Kroos simply loves playing against Celta Vigo, scoring his sixth goal for Real Madrid against the team from Galicia on Sunday night out of his total of 14 in Los Blancos' shirt in LaLiga Santander.

Every shot that he has had against Celta has ended in a goal, whilst his next favourite opponent is Sevilla on just two goals in comparison.

With Real Madrid behind on Sunday, Marcelo set him up with a ball onto the penalty spot and Kroos provided a trademark finish with the inside of his boot to convert.

It is the fifth year in succession in which he has scored against Celta, beginning on April 26, 2015, when he scored after 15 minutes to make it 1-1 in a 4-2 win under Carlo Ancelotti.

In 2016, it was under Zinedine Zidane as he scored with a peach of an effort from outside the box to win the game 2-1 with just eight minutes left in the early season encounter.

His best goal came in 2019, a long-range effort beating Ruben Blanco after brazing the post to make it 2-0.

Now, Kroos has equalled his most prolific season at Real Madrid with five goals, the same as in 2017/18 and he is just one assist off of the eight he gave that season, still some way from his record tally of 16 in 2016/17.