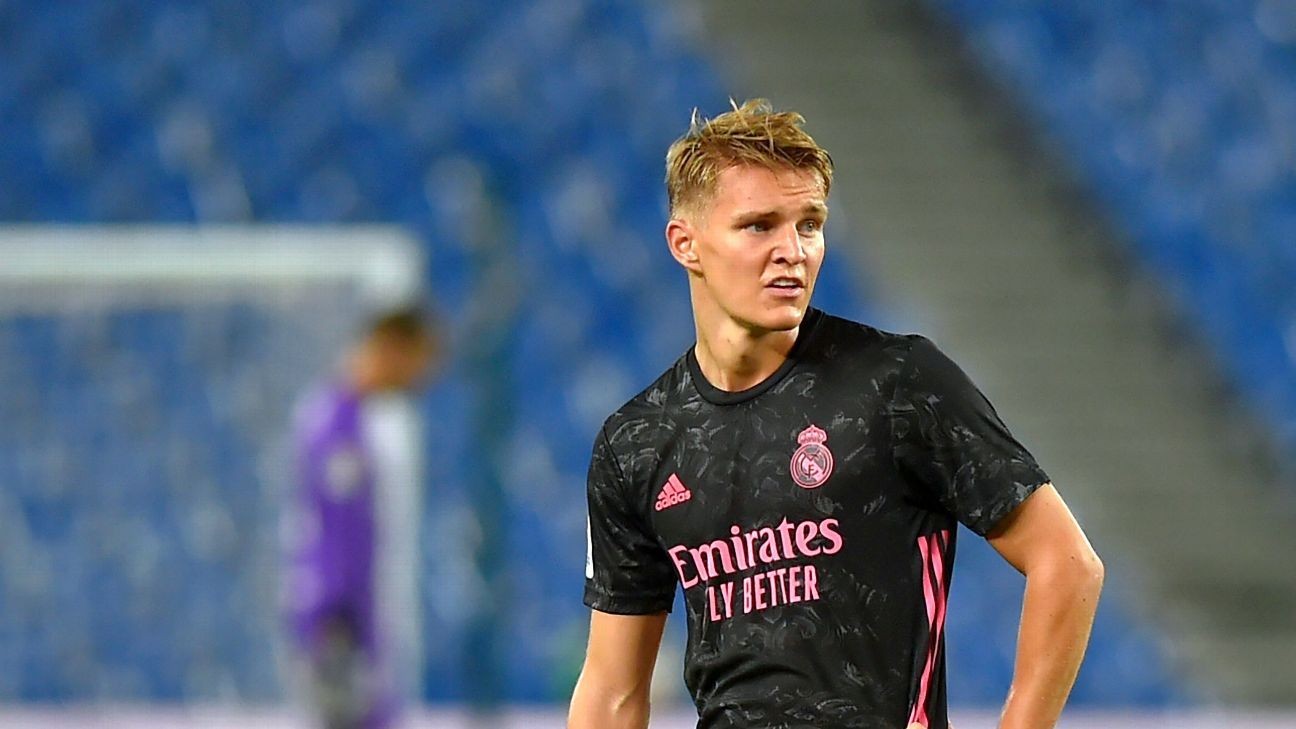 Real Madrid began their bid to defend the La Liga title by dropping points in a 0-0 draw at Real Sociedad on Sunday.

Madrid controlled the first half but failed to create clear-cut chances. Sergio Ramos had an effort blocked and Karim Benzema shot wide after rounding goalkeeper Alex Remiro. The best opportunity of the half actually fell to Real Sociedad's Alexander Isak, who was denied by a superb save by Thibaut Courtois.

In the second half, chances remained in short supply as Benzema had another shot saved, while Raphael Varane got in the way of a goal-bound effort from substitute David Silva, on for the home side for his debut.

Martin Odegaard's return to Madrid -- after shining on loan at Real Sociedad -- has generated a lot of excitement, but a question mark remained over how he would fit into Real Madrid's midfield. We got our first clue here, as a new 4-2-3-1 formation allowed Odegaard to play in his preferred No..10 position.

The home side were one of the best teams to watch in La Liga last season, especially pre-lockdown, and have plenty of young talents themselves, but here Madrid were the better side for long spells, missing the final ball or touch which should come with the rhythm of competitive games.

Madrid displayed a lack of cutting edge here which will be cause for concern for coach Zinedine Zidane. They played well at times but got into goal-scoring positions far too infrequently. Added to that, with an offensive-looking team starting the match, there were a worrying lack of attacking options on the bench when a change was required.

The absence from the squad of Eden Hazard -- with Zidane admitting pre-match that the Belgian is still not match fit after ankle injuries disrupted his debut season at the Bernabeu -- was no surprise, but that doesn't make it any less troubling. Hazard will need to return to the team and impress fast if he's to dispel the doubts surrounding his big-money arrival a year ago.

6 -- Zidane picked a surprisingly attacking line-up for Madrid's first game of the season, and a potentially tricky away test. Casemiro was left on the bench, and that meant a double pivot of Toni Kroos and Luka Modric behind Odegaard, and a front three.

The system favoured Odegaard, and while Madrid had pace out wide in abundance in Vinicius and Rodrygo, the opening goal didn't come despite a good start. Zidane made a triple change midway through the second half, including the introduction of young winger Marvin Park, but the breakthrough never came.

GK Thibaut Courtois, 7 -- Started this season where he finished the last: making big saves at crucial times. His stop before half-time, stretching a leg to divert Isak's shot, prevented Madrid from going in behind at the break.

DF Dani Carvajal, 8 -- Caught hard in the chest by Ander Barrenetxea in the first half, and provided a dangerous cross that almost found Rodrgyo at the near post. An optimistic second-half shot was close to catching out Remiro.

DF Raphael Varane, 8 -- Did well in the second half in particular, when the game opened up and his pace was needed to cope with Real Sociedad's counter-attacks. Painfully blocked Silva's shot from the edge of the box.

DF Sergio Ramos, 7 -- A good start to the season. One clever change of direction under pressure in the second half showed how confident he is on the ball.

DF Ferland Mendy, 7 -- Zidane's decision to sell Sergio Reguilon to Spurs showed he backs Mendy to be Marcelo's successor. His partnership with Vincius is hugely promising going forward. A tough battle up against the awkward Portu saw him pick up a first-half yellow card.

MF Toni Kroos, 8 -- Kroos doesn't always enjoy the greater defensive responsibility that comes when Casemiro is left out, but he was impressive here, always looking for the ball to start moves from deep.

MF Martin Odegaard, 6 -- Made his first La Liga start for Real Madrid, five years after signing for the club. His inclusion against the team he starred for on loan was unexpected but there were moments of combination play with Benzema that suggested there's much more to come.

FW Vinicius Junior, 7 -- Has an opportunity to make the left-side of the attack his own until Hazard returns to fitness. Got on the ball early, and caught the eye with one first-half nutmeg. A good-looking cross for Benzema was just cut out, and later he found the French striker for Madrid's best chance of the match.

FW Rodrygo, 7 -- His pace caused problems for Real Sociedad's Aihen Munoz early on. Switched flanks at times but faded with the team.

FW Karim Benzema, 7 -- Could have scored in the first half, but shot across goal from a difficult angle after Remiro's error. Slipped just as he shot left-footed from the edge of the box after that. Looked to enjoy playing with Odegaard and should thrive on the service he'll get from the three youngsters around him.

MF Casemiro, 6 -- Replaced Odegaard as Zidane looked to tighten up the game in midfield.

MF Federico Valverde, 6 -- Came on for a tiring Modric but needs to find his form again this season.

FW Marvin, 6 -- His first team debut. The 20-year-old had impressed in Madrid's UEFA Youth League win and had a half-chance to score here, stumbling when found by Vinicius in the box.

MF Sergio Arribas, N/R -- Another youngster on for his debut in added time.