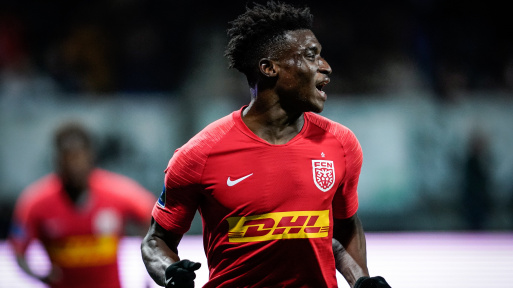 Ghana international Kudus Mohammed's impressive performances in the month of June for Nordsjælland has been rewarded after being shortlisted for Young Player of the month award in Danish top-flight.

The attacking midfielder, who has been attracting interest from top European clubs, made five appearances and scored two goals.

To win the award, he must beat off competition from Max Fenger, Morten Frendrup, Mohamed Daramy, and Mads Frøkjær-Jensen.

It has been an incredible 2019/20 season for the former Right to Dream Academy graduate.

His impressive performances has earned him massive admiration with several sports tabloids linking him with a move away from Denmark at the season of the season.

Reports suggest that he is being monitored by the likes Borussia Dortmund, Real Madrid, Paris Saint Germain, Tottenham Hotspurs, Everton, and Newcastle United.

He has made 25 appearances for Nordsjælland, scored 10 goals and provided one assist in all competitions so far this season.

He has also been shortlisted for the 2020 Golden Boy Award.

Mohammed scored on his debut for the Black Stars against South Africa in the 2021 Africa Cup of Nations last November.