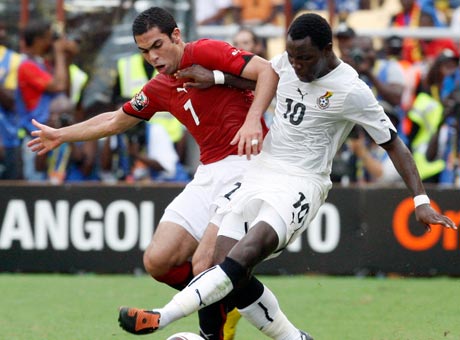 Ghana midfielder Kwadwo Asamoah has admitted that his hopes of playing for Arsenal this season are over as he will stay with his Italian club Udinese.

The 21-year-old was the Black Stars key player at the 2010 African Cup of Nations in Angola where he steered his country to the final.

But his not-too-impressive performance at the World Cup in South Africa in June seems to have killed off interest from the clubs.

Asamoah now admits he will stay at Udinese for the upcoming season as interest in his services has waned.

"I was expecting some news on my return from the World Cup.Â But I'm still here,â€ Asamoah said as the club prepares for the new season which starts this weekend.

â€œI will still be there for one season at least.Â I am happy here.Â I can still get better. "

â€œGaetano D'Agostino and Simone Pepe left the club but we still have good players.Â We have a good team," Asamoah added.