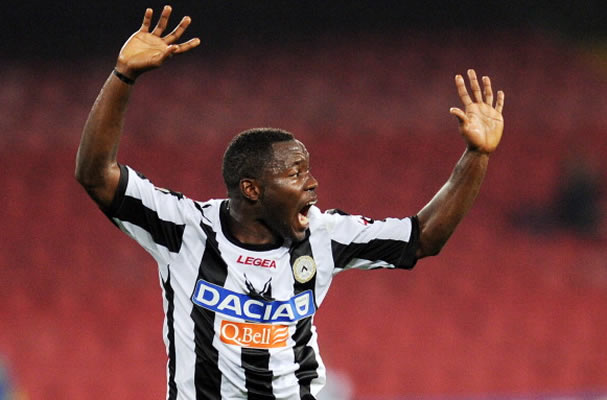 Ghana midfielder Kwadwo Asamoah's future at Udinese is in doubt after his agent revealed he will fit into the play of Napoli.Â

The 23-year-old has emerged as a huge target for host of top clubs in Europe following rock-strewn performances for the Italian side in the past few years.

Asamoah has been strongly linked with English giants Manchester United with Italian powerhouses Juventus and AC Milan believed to have enquired about his availability.

But the ambitious Napoli side is reported to be key admirer of the talented middle man.

His representative has given the strongest indication that the player could join Walter Mazzari's side next season.

"Asamoah to Napoli? I donâ€™t want to talk about this player because Udinise are at a crucial stage of the season, because they want to get to third place,'' Claudio Vaghggi said.

"Asamoah is a sought-after player, but I would not get wrapped up in this during a delicate time for Udinise.

"He has great physical strength, great personality and would have no problems fitting in and playing at a club like Napoli.

"I believe that (Federico) Fernandezâ€™ failure is precisely due to the pressure that is in that city."

Udinese have set a price-tag of around 15 million pounds for the Ghanaian super star.