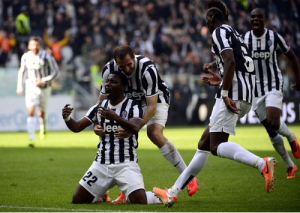 Ghana midfielder Kwadwo Asamoah will be facing Olympique Lyon after his club Juventus were drawn against the French giants in the quarter finals of the Europa League.

The Black Stars playmaker helped the Italian champions into the last eight of Europeâ€™s second tier club competition after posting a 1-0 win over Serie-A rivals Fiorentina on Thursday night.

The impressive result in Firenze saw Antonio Conteâ€™s side progress with a 2-0 aggregate scoreline.

Juventus must however galvanize themselves again as they come up against Lyon at the next stage of the competition.

The former French champions will host the Old Lady in the first leg of the quarter final tie on April 2 with the return encounter scheduled to be played 7 days later.

Juventus hope to make amends by winning the Europa League following their early exit from this seasonâ€™s Champions League.