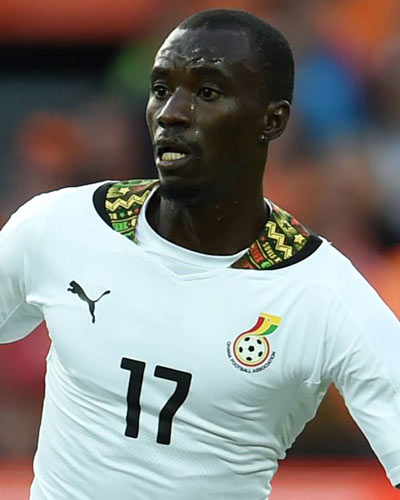 Rabiu Mohammed was replaced by Kwesi Appiah during Sunday's game

Ghana coach Kwesi Appiah has revealed he forced to replace midfielder Rabiu Mohammed due to injury in Ghana's 1-1 stalemate with Uganda in Saturday's 2015 AFCON qualifier.Â

The Kuban Krasnodar central midfielder was a pale shadow of himself and replaced in the second-half by Parma midfielder Afriyie Acquah.

And, Ghana head coach Kwesi Appiah has revealed he had to substitute him because the midfielder had suffered a cramp.

"Rabiu was subbed because he had cramps. Jordan was brought on because we needed fresh blood," he said in the post-match interview.

The Black Stars failed to make inroads in the game and needed a somehow soft penalty, converted by Andre Ayew in the 50th minute to snatch draw from the game.

He could make alter his squad and introduce players who did not play in the Uganda game for the trip to Togo on Wednesday.