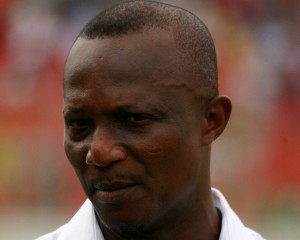 Ghana Under-23 coach Kwesi Appiah announced his maturity in coaching by guiding the country to win a first All Africa Games gold at this year's edition.

He etches his name in Ghana's footballing folklore by becoming the first coach to end the country's 56-year wait for a Games gold medal.

The ex-international dropped a message of intent when he guided the Black Meteors to get the needed two qualification goals to eliminate Nigeria's Dream Team V in July.

Appiah's campaign was dealt a blow two days to the start of the competition when he lost starters Ben Acheampong and Malik Akowuah to injuries.

He makes a strong case for local coaches after his compatriots failed to impress at the CHAN tournament early this year and the 2012 London Olympics qualifiers.

The soft-spoken trainer suffered a blip last September when he took temporarily charge of the Black Stars to draw goalless with Sudan in the Nations Cup qualifier.

Appiah will have very little time to rest as he joins the senior national team next month, where he serves as assistant coach.

He must assist his boss Goran Stevanovic to hatch a plan to beat Sudan on 8 October in a final Nations Cup qualifier.