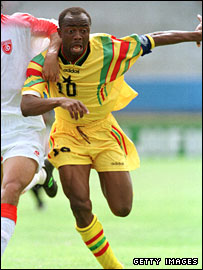 Records available installs the ex Olympique Marseille player as such with 33 goals scored in his 16-year stint with the Black Stars but this has been strongly contested by Kwoffie.

â€œI havenâ€™t seen anywhere that Abedi is the all-time top goal scorer for this country and I donâ€™t think Abedi himself has made claims to that record,â€ he told GHANAsoccernet.com.

â€œHe has helped us in the past by scoring crucial goals but I donâ€™t think he is saying that his is the top goal scorer of this country.â€

On the contrary, the Fifa instructor suggests deceased Edward Acquah stands tall in his list of superior goals scored for the Black Stars but has been denied the accolade due to poor record keeping.

â€œThis was a player (Acquah) who scored five goals in one international match for Ghana.

â€œHe scored against a goalkeeper like Yashin when he was the worldâ€™s no.1 at that time in Moscow and in Ghana and therefore I have no doubt at all that he is the best goal scorer this nation has ever produced.â€