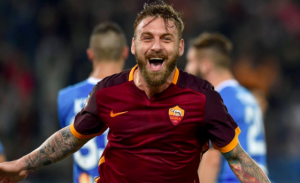 The Galaxy are known for having attracted some of Europe’s biggest stars such as the likes of David Beckham and in more recent times, Liverpool icon Steven Gerrard as well as former AC Milan midfielder Nigel De Jong, and they are now lining up their latest target.

According to Roman based newspaper Leggo, De Rossi is set to receive an offer from the American club worth €7 million per year.

The amount is considered a substantial increase from what he could be offered by the Giallorossi, who are looking to cut costs and lower the wage bill.

However, it remains to be seen whether De Rossi can be tempted with a move away from the Italian capital by attractive wages, as the 32-year-old has remained reluctant to leave his boyhood club throughout the duration of his career, despite interest from some of Europe’s biggest teams.