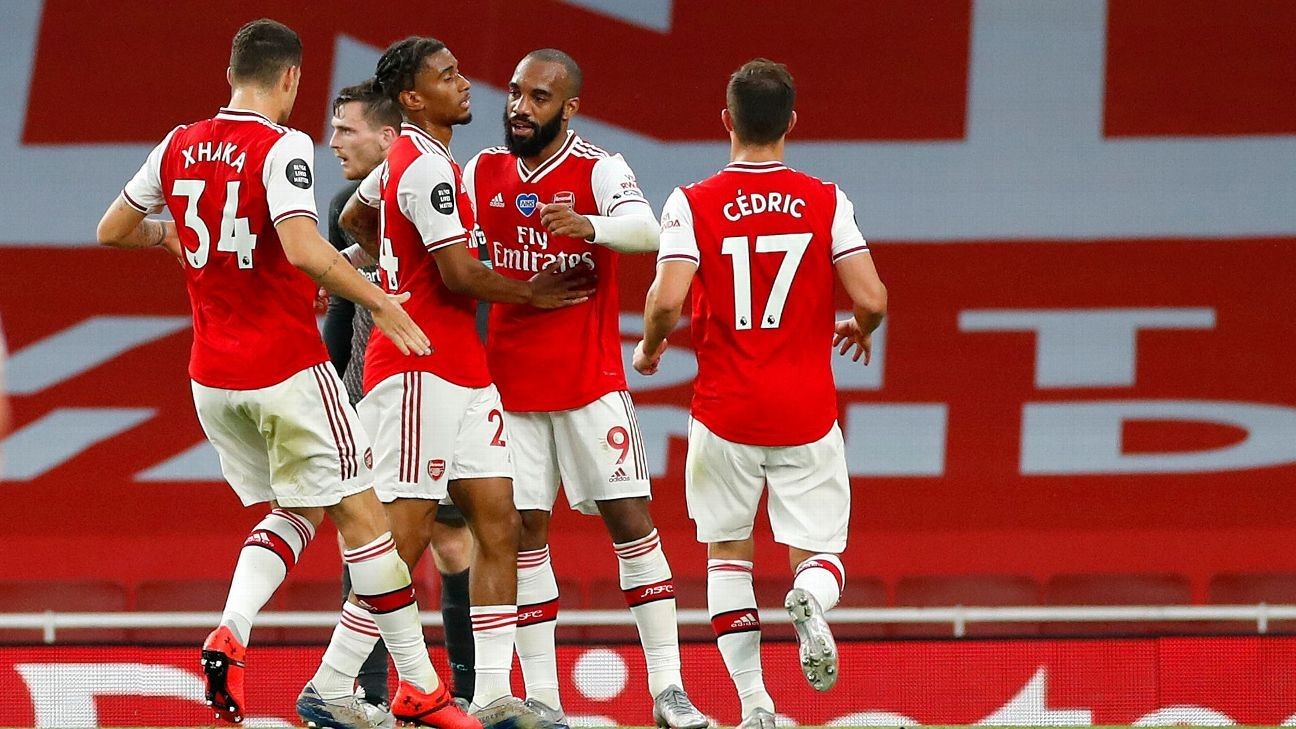 Arsenal capitalised on some dreadful Liverpool defending to come from behind and beat the Premier League champions 2-1 at the Emirates on Wednesday night.

The hosts started sluggishly and found themselves a goal down after 20 minutes when Sadio Mane slotted home following good work by Andrew Robertson. But the game turned on its head in the space of 12 first-half minutes, when uncharacteristic mistakes from Virgil van Dijk and Alisson allowed Alexandre Lacazette and Reiss Nelson to clinically finish and seal all three points for the north Londoners.

Mikel Arteta's side only really had two meaningful chances, but the finishing from both Lacazette and Nelson was excellent.

It was an extremely passive opening 30 minutes that aptly sums up why Arsenal are streets behind the Premier League elite. They were chasing shadows, second to react to loose balls and were always playing catch up until they were handed a route back into the game.

6 -- Arteta's men were struggling to find a way out of the Liverpool stranglehold, but thanks to a couple of gifts from the visiting backline, the Spaniard has one of his first major managerial upsets.

GK Emiliano Martinez, 6 -- Got away with one in the early stages when his clipped clearance cannoned straight into Liverpool striker Roberto Firmino, but the Argentine's blushes were spared when the ball glanced off the post and behind.

DF Cedric Soares, 6 -- Went in for an aerial dual against Robertson that he was never going to win, and the space left behind was exploited by the visitors on the way to their opener.

DF Rob Holding, 6 -- Fortunate to not be punished after needlessly running into trouble in his own defensive third in the first half, but with the bulk of Liverpool's play being in front of the 24-year-old, he had a largely comfortable night.

After Man City win appeal, who qualifies for Europe from Premier League?Arsenal keeper Emiliano Martinez may still have a future as Argentina's No. 1Ranking soccer's all-time top 101 kits

DF David Luiz, 6 -- A relatively quiet evening for the Brazilian, but could well have added another "David Luiz moment" to his collection when he was put on his backside by some neat Mohamed Salah footwork, before the Egyptian forced a decent save from Martinez.

MF Kieran Tierney, 7 -- A solid display from the Scot, who has featured in all nine games since the Premier League resumed. Kept Salah largely at bay in what was a low-key area of the pitch in regards to notable action.

MF Bukayo Saka, 6 -- Unable to really stamp his creative flair on the game from his left wing-back position, but his fleeting touches show he has a footballing maturity beyond his years.

MF Lucas Torreira, 6 -- Like many of his teammates, the Uruguayan was too slow to react to the impending danger on the way to Mane's tap-in. Picked up a yellow card inside the first 30 seconds of the second half for bringing down Joe Gomez.

Alexandre Lacazette scored one and assisted on another as Arsenal came from behind to beat Liverpool 2-1. Getty

MF Granit Xhaka, 5 -- Caught ball watching in the build-up to the opener, meaning he was half a yard away from being an able to cut out Robertson's cross. Some poor defending early then gifted Liverpool an early second-half chance that they were unable to take. Booked for catching Naby Keita with his studs in the 81st minute.

FW Nicolas Pepe, 5 -- A difficult night in which the Ivorian was forced to chase hopeful punts rather than orchestrating any meaningful attacks.

FW Reiss Nelson, 7 -- Deserves credit for the Gunners' equaliser after forcing the mistake from Van Dijk for Lacazette to score, before smartly slotting home just before half-time to put his side ahead.

FW Alexandre Lacazette, 7 -- A frustrating first half hour for the Frenchman, before showing great composure to pounce on a loose back pass from Van Dijk to round Alisson and tap home. The Arsenal No. 9 turned provider just before the break when he intercepted Alisson's poor pass before laying the ball on a plate for Nelson to finish.

MF Dani Ceballos, 6 -- Booked for a poor aerial challenge on Takumi Minamino in the closing stages.

FW Pierre-Emerick Aubameyang, 6 -- Saw desperately little of the ball as the visitors pushed for a late leveler.

MF Joe Willock, 6 -- Should really have finished the game off in the final minute of normal time, but sliced a simple volley wide.

MF Ainsley Maitland-Niles, N/R -- Did just about enough to put Mane off after the forward got in behind the Arsenal defence late on.