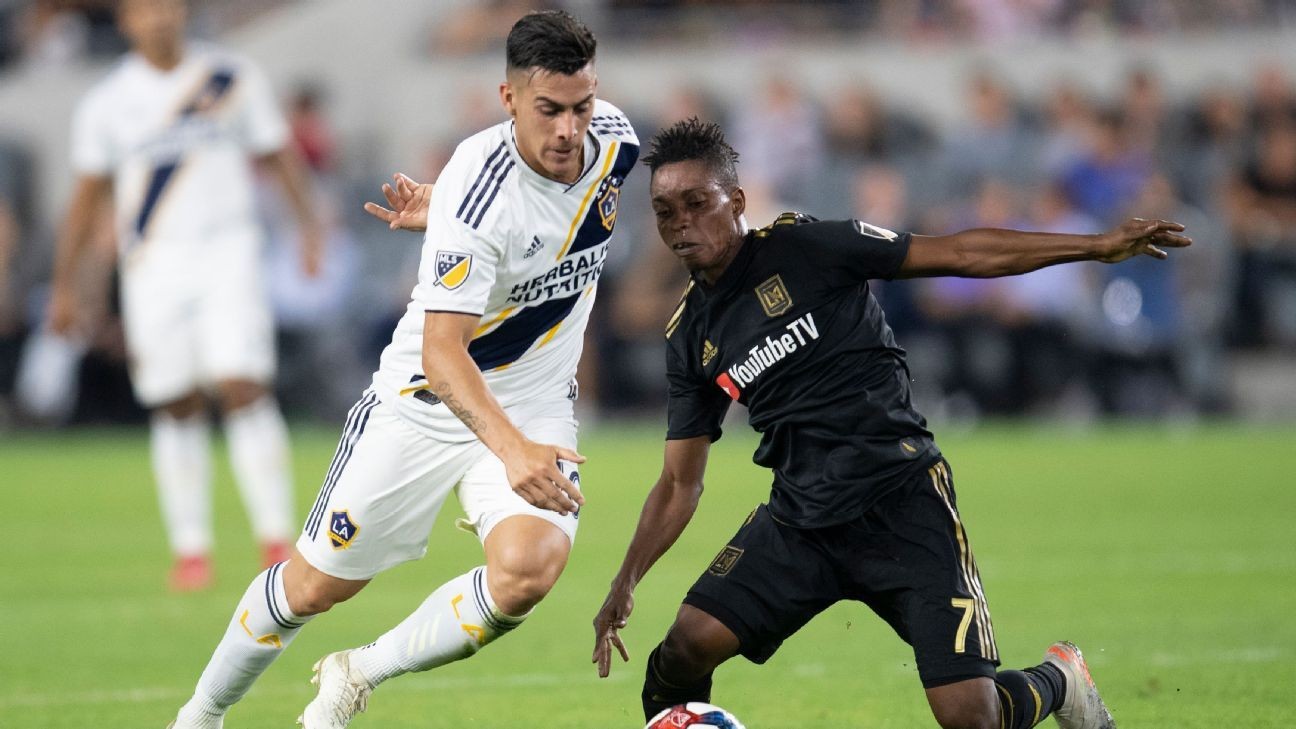 In LAFC's two years of existence, the club has quickly become one of the most important in Major League Soccer. From its downtown stadium and raucous atmosphere to its appealing style of play and single-season MLS points record, the club has been an unmitigated success.

Those facts don't exactly drum up much excitement down the 110 freeway in Carson, where the LA Galaxy have existed for years without any real threat to their supremacy in the local market. For swaths of Galaxy supporters, LAFC was -- and maybe still is -- considered a shiny new object incapable of measuring up to their club's history.

No matter the vantage point, what's clear is that LAFC's arrival has hatched what has already turned into one of the most anticipated rivalry matches in the league -- the latest edition of which takes place Saturday in the MLS is Back Tournament (10:30 p.m. ET; LIVE on ESPN, Deportes, app). The Los Angeles derby -- or El Trafico -- is a rarity in MLS: a true local rivalry. Only the Hudson River derby between the New York Red Bulls and New York City FC compares, but a number of hurdles (with Yankee Stadium's inadequacy for soccer looming a major one) have prevented it from gaining the type of momentum that exists in Los Angeles.

- Stream MLS is Back on ESPN networks, App | FC Daily on ESPN+
- Marshall: Inside the bubble, positive tests raise tension in games
- Schedule, TV info: What you need to know | Group standings

During LAFC's first two regular seasons, a major theme was its trouble with the Galaxy. Or, perhaps more accurately, with Zlatan Ibrahimovic. The Swedish superstar's memorable MLS debut in 2018 came with one of the best goals in league history and a late winner to help the Galaxy erase a 3-0 LAFC lead to win 4-3 in the first game between the clubs. It was a wildly entertaining way to kick off the rivalry and Ibrahimovic went on to score six more goals against LAFC in the next four regular-season matchups spanning 2018 and 2019 -- none of which saw LAFC leave victoriously.

As dominant as Ibrahimovic was, LAFC's Carlos Vela might have been better. Last year's league MVP, Vela scored at least once in each of those rivalry games, before adding two more as the Black and Gold finally broke through with a 5-3 playoff win against the Galaxy in October to advance to the Western Conference final.

Ibrahimovic and Vela have combined for 18 of the 32 goals scored between the two teams in the series, which is why -- on top of the general bizarreness of a tournament in a bubble without fans -- Friday's renewal of the derby in the MLS is Back Tournament will have a much different feel. Ibrahimovic returned to AC Milan following the expiration of his Galaxy contract and Vela opted out of the tournament to remain in Los Angeles with his pregnant wife.

With those two out of the picture, here are three key players and one young American from each team to keep an eye on. Both sides will look to pick up their first wins in the tournament after LAFC clawed back from a 3-1 deficit to secure a draw with Houston in their opener, and the Galaxy fell 2-1 to Portland.

Diego Rossi: Usually occupying the left wing opposite Vela, Rossi scored 16 goals in 2019, fourth best in MLS. There was some speculation he would depart for Europe after two strong seasons for LAFC -- especially after the club signed Brian Rodriguez, another winger from Penarol in Uruguay, which also produced Rossi -- but the right deal didn't materialize. Rossi scored a brilliant goal against Houston on Monday but has only one goal to his credit in six matches against the Galaxy.

Eduard Atuesta: Another player who figures to move to Europe in the near future, Atuesta is coming off an MLS Best XI season during which the Colombian solidified himself as the most important central piece in the team's possession-heavy approach. He most commonly takes possession deep but is very effective as a distributor in the final third and is a threat on set pieces.

Cristian Pavon and Latif Blessing will be two names to watch in the latest edition of El Trafico. Kyusung Gong/Icon Sportswire via Getty Images

Latif Blessing: Blessing is manager Bob Bradley's most versatile player. In 2018, he was used mostly as a high-energy winger and appeared destined for a move to right back last preseason before circumstances dictated he get a shot in the midfield. He took to the position with ease and it became nearly impossible for Bradley to take him off the field. Blessing's ability to quickly reverse positions with the ball at his feet allows him to get out of tight spaces with ease.

Bryce Duke: Duke didn't play against Houston, but he logged a pair of appearances in LAFC's first two games of the MLS season before it was suspended, and had a 28-minute debut against Club Leon in the CONCACAF Champions League. Duke, who grew up in Arizona, signed with LAFC as an 18-year-old in January on a homegrown deal after his rights were acquired from Real Salt Lake.

LA Galaxyplay1:09LAFC-LA Galaxy can become a 'proper' rivalry without Zlatan

Jon Champion says LA Galaxy and their rivalry with LAFC will be better off without Zlatan Ibrahimovic.

Javier Hernandez: This match originally figured to be a must-see affair for fans of Mexico, but with Vela and Hernandez's Galaxy teammate, Jonathon dos Santos, both out, Chicharito is the lone full Mexico international expected to feature. Mexico's all-time leading goal scorer notched his first MLS goal on Monday and there is no question -- fair or not -- he's expected to fill the void left by Ibrahimovic's departure. The numbers will be tough to replicate, but Chicharito is a more willing defender and, if things work out to plan, he could be a better overall system fit for manager Guillermo Barros Schelotto.

Cristian Pavon: Pavon instantly made the Galaxy more dangerous going forward upon his arrival from Boca Juniors on loan late in 2019, and the 24-year-old Argentina international figures to be one of the most dangerous attacking players in the league in his sophomore season for the Galaxy. He was arguably their best player against Portland, which included the assist on Chicharito's goal.

Sebastian Lletget: Lletget gives the Galaxy some positional flexibility as he's capable of playing wide as he did Monday on the right against Portland or more centrally in the midfield as he did in seven appearances for the U.S. between 2019 and 2020. Since scoring seven goals in his debut season for the Galaxy in 2015, though, Lleget has managed only 0.28 goals + assists per 90 in MLS, which needs to improve.

Cameron Dunbar: The 17-year-old homegrown attacker certainly didn't look as if he were making his MLS debut against Portland. In fact, he was one of the game's most influential players before being subbed off after 67 minutes. Dunbar's performance bodes well for his future with the Galaxy and with the United States at youth levels.