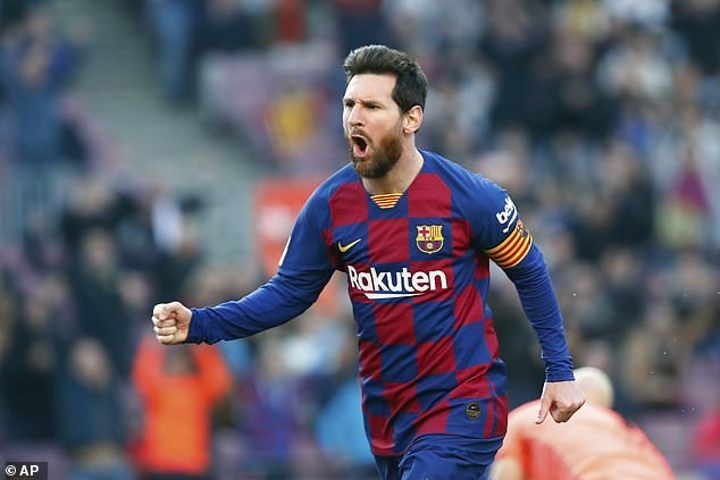 The task of salvaging the football season in the country with the third highest death toll from Covid-19 in Europe has always looked a huge one but Spain’s La Liga took a big step on Saturday when the Spanish Government announced it could restart in the second week of June.

As well as meaning Barcelona and Real Madrid will be able to resume their title race in three weeks, it also means La Liga should now avoid financial penalties from television companies.

Forfeitures written into TV contracts were due to come into effect if football stayed off television screens for more than 90 days and with La Liga inactive since March 12 that date was looming.

La Liga President Javier Tebas tweeted: ‘We are very pleased with the decision, it is the result of the great work of the clubs, players, coaches, CSD (Spanish Sports Council) and agents.

‘But it is important to follow health regulations so evolution of the pandemic stays under control. We can't drop our guard.’

Earlier Saturday Real Madrid winger Vinicius had admitted that at the beginning of the coronavirus pandemic he feared the season would be never be finished.

‘There were moments when the crisis was so huge and the number of deaths so high it seemed impossible that football, or any other activity, could return in just a matter of months,’ he said reflecting the beliefs of many players in Spain.

‘But in time we began to see the light at the end of the tunnel. Now I am convinced we are going to be able to get things back to normal bit by bit, and one of those things is football,’ the 19-year-old Brazilian added.

There were still doubts as late as last week when Spanish radio Cadena Cope claimed that the Spanish League had ruled out a June 12 start because Spain’s regionalized relaxation of lockdown measures was making uniform progress impossible.

But La Liga told Sportsmail on Friday that they were still hopeful of remaining on course and Spain Prime Minister Pedro Sanchez’ announcement Saturday means their optimism looks well-placed.

Players at the 20 first division clubs moved from individual training to group training last Monday. Sessions in groups of no more than ten players will continue into next week with clubs scheduling another round of coronavirus tests for their players towards the end of next week.

The following Monday teams will be allowed to move into full-squad training before Sevilla’s meeting with Betis on Friday June 12 becomes the first game back.

There are 11 rounds of matches left to be played and Tebas wants the season completed in a 35-day period with games played every day of the week.

There are still obstacles to be overcome. The players union AFE is likely to resist any requests for players to move into lockdown team hotels in the lead up to the resumption of the season. And there are concerns about players playing in heat and without adequate rest.

But La Liga has made assurances regarding the latter two concerns and is unlikely to insist on the former.

Money has been the driving factor behind getting the season back on.

Football generates an estimated 1.37 per cent of the country's GDP and is responsible for over 18,000 jobs.

Tebas has made it clear that the season being written off would mean 1 billion euros losses, while the season playing out behind closed doors would cost 300 million. With the extra losses likely to be passed on to players in the form of salary cuts there has been little resistance to the game’s return although many players and coaches did take an early stand against coronavirus diagnosis tests being made available to them before they were full available to medical staff.

Spain has registered more than 230,000 infections and over 28,000 deaths but with some of the strictest lockdown regulations in Europe the daily death toll fell to 56 on Friday.