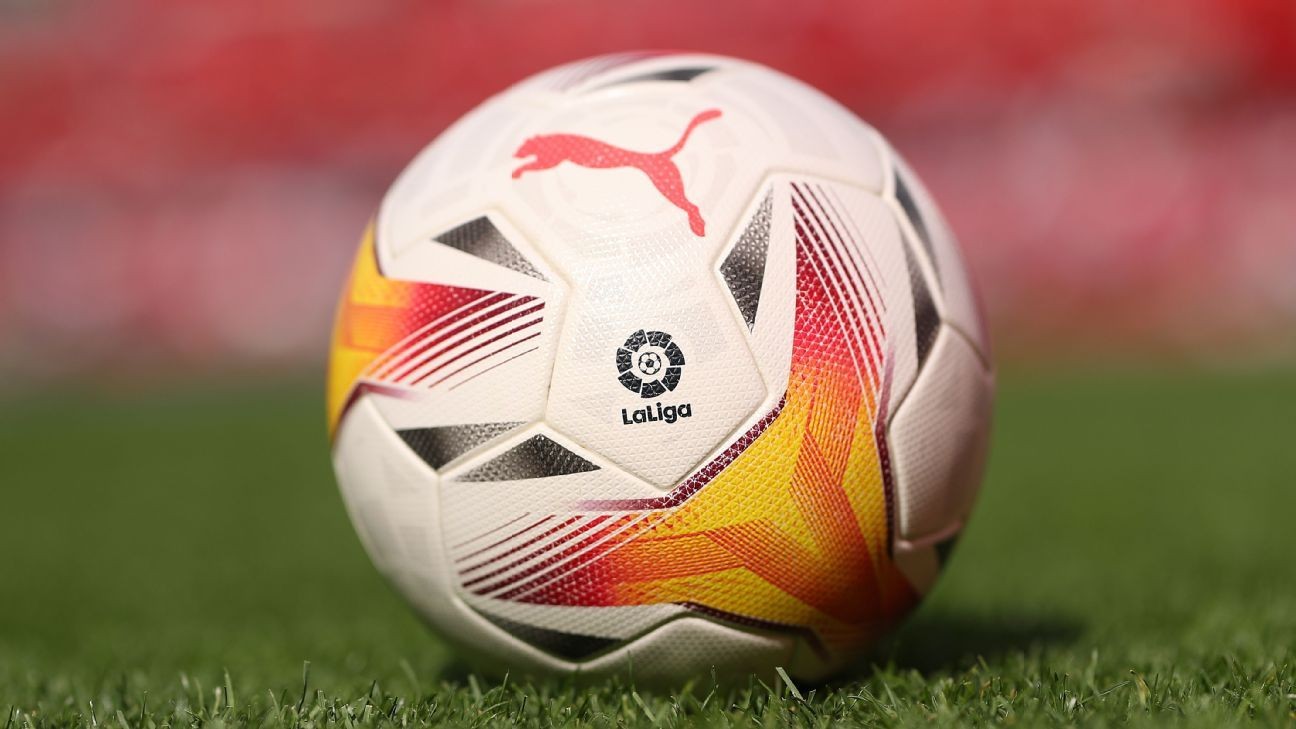 Real Madrid haven't managed back-to-back LaLiga title wins in 14 years, but that's the challenge facing Carlo Ancelotti's Spanish champions when they kick off this season's campaign away at Almeria on opening weekend. The fixture list for 2022-23 was released on Thursday, with the season beginning on the weekend of Aug. 14, taking a break for the World Cup from Nov. 9 to Dec. 29, and ending on the weekend of June 4.

As well as Madrid's trip to Almeria, the opening weekend will see Barcelona -- who finished second last time out, 13 points behind, after coach Xavi salvaged their season -- host Rayo Vallecano, and Diego Simeone's Atletico Madrid away at Getafe. Andalusian giants Real Betis and Sevilla will begin their seasons against Elche and Osasuna, respectively, while Real Sociedad, who briefly topped the table last year before Madrid took control, will play Cadiz, and Valencia, now managed by Gennaro Gattuso, kick off against playoff winners Girona.

Beyond that opening weekend, what does the fixture list tell us about the kind of season we can expect to see in Spain this year?

It surely won't be so easy for Real Madrid this time around. Last season's title win -- topping the table for all but six of the 38 matchdays -- never felt in doubt. Rivals Barcelona and Atletico struggled badly early on, and Ancelotti's team were consistent from the off, barring minor wobbles in October and January.

Just like last year, the club asked to play the first three games of this season away to allow work on the Santiago Bernabeu redevelopment to continue at full speed through August, when many Madrilenos are on the beach anyway. That means they'll travel to Almeria -- back in the first division for the first time in seven years -- Celta Vigo and Espanyol, before finally playing a home game on the weekend of Sept. 4 against Real Betis. Madrid took seven of a possible nine points from their opening three away fixtures last season and will be looking for a similar return this time.

Barca's 2021-22 was conditioned by the dreadful October run that forced president Joan Laporta to pull the trigger on one club legend, Ronald Koeman, and appoint another, Xavi. They won just one of five league games that month -- including losses to Atletico, Real Madrid and Rayo -- leaving them ninth in the table and Xavi with a mountain to climb.

This time, Barca's start looks potentially straightforward at Camp Nou -- they host Rayo, Real Valladolid and Elche in their first three home games -- but tricky on the road. They'll travel to Real Sociedad on matchday two and Sevilla on matchday four, while the first Clasico of the season also comes away on matchday nine.

Return of Bielsa or Valverde to decide Athletic Club presidential election7mSid LoweBarcelona's financial plans a massive gamble on their future3dGabriele MarcottiIs big spending back? What we can expect from the transfer window8dTor-Kristian Karlsen

Xavi will be looking for his team to replicate the solid away form that saw them win six consecutive league games on the road between February and May last season, including their 4-0 thrashing of Real Madrid at the Bernabeu.

Atletico's title hopes will be tested early on

Atletico Madrid suffered something of an identity crisis last season, losing their famous defensive solidity as manager Simeone tried to strike a balance between a more expansive, attacking approach and keeping clean sheets. The low point came in December when they lost four league games in a row, the worst run of the Simeone era. Only a late rally, with 10 wins from their last 14 games, secured Champions League football for the 10th consecutive season.

The 2022-23 calendar has handed Atletico a difficult start. They'll play Unai Emery's Villarreal on matchday two and Gattuso's new-look Valencia on matchday three, both in August, before travelling to Real Sociedad on matchday four, facing the derby with Real Madrid on matchday six (the weekend of Sept. 18), and then a trip to Sevilla on matchday seven.

Even if last year's top four ended up looking familiar -- there were no surprises among Real Madrid, Barcelona, Atletico and Sevilla -- there were moments when a changing of the guard looked possible, with Real Sociedad, Real Betis and even Andoni Iraola's Rayo Vallecano finding themselves in the Champions League spots.

This season, Villarreal will expect to mount a more serious top-four challenge, without the serious distraction of a Champions League run, while Manuel Pellegrini's Betis, orchestrated by Nabil Fekir and Sergio Canales, should entertain again.

The LaLiga season begins the weekend of Aug. 14. Is there another title in store for Real Madrid? Fran Santiago/Getty Images

The Seville derbies will, as ever, be unpredictable. The first will be played at Betis' Benito Villamarin on matchday 13, the weekend of Nov. 6, while the second at Sevilla's Sanchez Pizjuan comes late, on matchday 35.

Real Sociedad's first Basque derby with an Athletic Club led by either Marcelo Bielsa or Ernesto Valverde -- depending on which presidential candidate wins this week's elections -- will come on matchday 17, the weekend of Jan. 14, at the Reale Arena.

The games you can't miss

The first big test for Xavi's team this season, on matchday two. San Sebastian used to be a nightmare away trip for Barca -- they went seven league games without winning there between 2011 and 2016 -- but their record has improved significantly lately, including a 1-0 win last time back in April. La Real have played some of the most attractive football in LaLiga in recent seasons under coach Imanol Alguacil.

Atletico emerged victorious in the last Madrid derby at the Wanda Metropolitano -- Yannick Carrasco scored the only goal in a 1-0 win on May 8 -- but with Real Madrid already confirmed as league winners and Ancelotti resting Karim Benzema, Vinicius Junior, Thibaut Courtois and Luka Modric, it felt like a hollow victory. This will be a much more serious affair, with Simeone wanting to prove that Atletico can become genuine title contenders once more.

El Clasico. You might have heard of it. The biggest game in club football needs little introduction, so we'll keep it brief: Spanish and European champions Real Madrid up against a Barcelona side that demolished them 4-0 in their previous visit to the Bernabeu on March 20. For that to happen once was embarrassing; a similar result this time would be truly historic.

The last time these two teams met at the Benito Villamarin -- in the Copa del Rey in January -- the game descended into chaos when Nabil Fekir's goal direct from a corner kick was followed by Sevilla midfielder Joan Jordan being struck by an object thrown from the crowd, and the match was suspended. This time let's hope the focus can remain where it should be: on the noisiest, most colourful and competitive derby in Spanish football, between two teams with real ambitions of competing with the big three.

The midseason break for the 2022 World Cup in Qatar throws another fascinatingly unpredictable variable into the mix this year: How will Madrid, Barca, Atletico and the rest deal with going seven weeks without a competitive league game? In particular, what kind of state will the international players who've been involved in the tournament be in when they return home? We'll get our first clues on matchday 15 -- the first round of games back, to be played from Dec. 29-31 -- and the pick of them is the Catalan derby.

May 28: Sevilla vs. Real Madrid

If there's still a title race come the penultimate round of games and Real Madrid are in the thick of it, their trip to the Sanchez Pizjuan on matchday 37 will be very interesting indeed. Madrid's 3-2 win at Sevilla on April 17 -- a textbook, absurd comeback, recovering from 2-0 down inside the opening half-hour with Benzema scoring a 90th-minute winner -- felt like the decisive moment in the story of their season. Who's to say we won't see similar drama this time around?