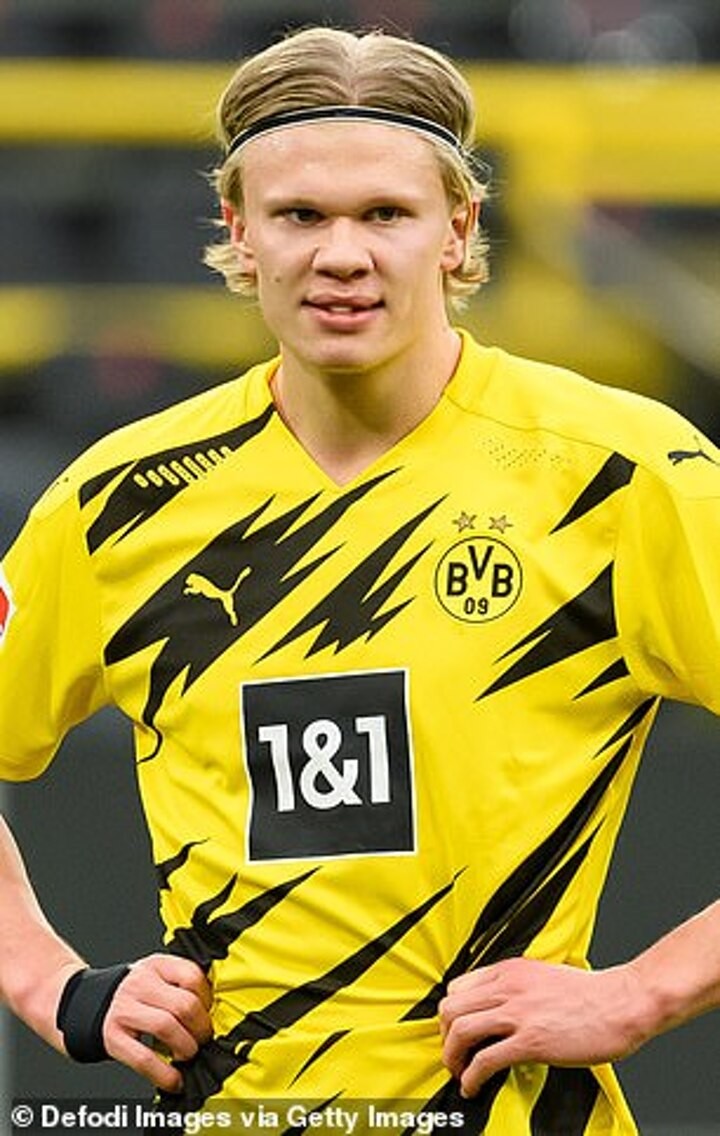 LaLiga president Javier Tebas believes it would be 'difficult' for Spanish clubs to make any blockbuster signings this summer, which would open the door for Kylian Mbappe and Erling Haaland to makes moves to the Premier League.

Real Madrid have long been linked with a move for PSG superstar Mbappe but may struggle to afford his mammoth £174million price-tag due to the ongoing Covid crisis.

Barcelona are also keeping tabs on Haaland but that switch appears to be even more unlikely, leaving the likes of Liverpool, both Manchester clubs and Chelsea to make moves for football's new star duo.

There could well be a major summer battle for both Haaland and Mbappe, with the two strikers facing uncertain futures at their respective clubs.

But Tebas believes LaLiga clubs may have to sit this one out once the transfer window reopens.

'It would be difficult for Haaland or Mbappe to come [to Spain],' Tebas said during a media event on Tuesday.

'Considering the numbers people are talking about, I see it as complicated.

'Real Madrid, which is the club most linked with Mbappe… I think it would probably wait (for the end of his contract) to sign him, that's the reality.'

Haaland's Borussia Dortmund are currently fifth in the Bundesliga standings, three points outside the top four.

Failure to qualify for the Champions League would almost certainly see the forward on the move this summer, with Chelsea, United and City all linked with the Norway international.

Mbappe, meanwhile, is approaching the final year of his PSG deal and would be allowed to leave for free next summer if he doesn't sign an extension.

His £174m fee will rule out a lot of clubs from signing him and Tebas believes only clubs backed by Gulf states could afford these types of marquee players.

Tebas has often accused the likes of City and PSG of breaking Financial Fair Play rules to get the best players, labelling their supposed tactics in the market as 'unfair'.

'The prices spoken about for certain clubs are very difficult to pay except for the state-run clubs, who sign players with oil or gas money,' said Tebas.

'They are the only ones who can do these deals and in an underhand way.

'There's eight billion less in the market, a PSG or a [Manchester] City might come along thanks to financial doping, but it's not possible for the rest of the teams.'

And while LaLiga may not be able to recruit the best players this summer, Tebas believes LaLiga should not be afraid to lose their top stars either – even if Lionel Messi decides not to renew his deal with Barcelona.

'We always want to have the best players,' Tebas added. 'It's obvious that it can hurt us if we lose (Messi), but I believe we are ready for these circumstances.

'Neymar left us and Cristiano Ronaldo left us and we still did well. If the bids for audiovisual rights are used as a thermometer, we could still do very well despite the departure of these players.'

Tebas has also not ruled out having some fans back in stadiums before the end of the season if conditions allowed.

He also said he was not concerned by Barcelona's economic plight because the clubs hardest hit by the financial effects of closed stadiums would also be in the strongest position to recover once grounds were reopened.

LaLiga is the only league in Europe to impose salary limits on its clubs, but Tebas wants the rest of Europe to follow suit.

He added: 'We have to think about having salary limits across Europe. There needs to be a rethink.

'So, a few can go from seven Ferraris to nine, from eight Lamborghinis to 10? We need to think: seven is fine. Football needs to redistribute wealth; that's the debate we could be having.'