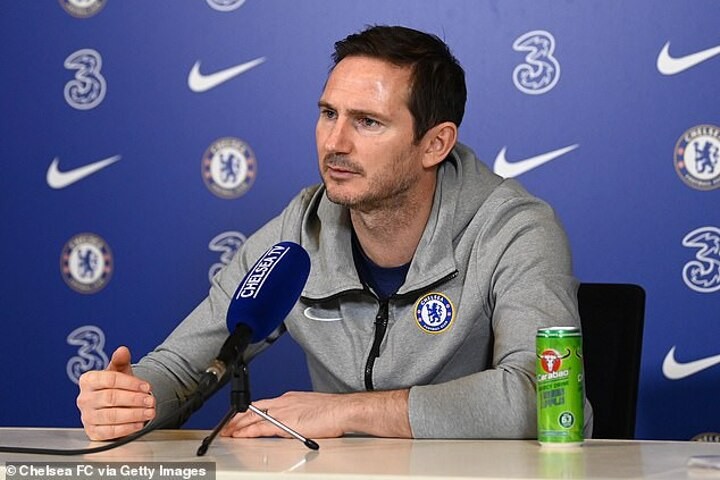 Frank Lampard fears Chelsea lack the 'goal machine' to challenge for the title — despite backing struggling striker Timo Werner to have a fantastic career at the club.

The Blues topped the table as recently as last month but are now eight points behind leaders Manchester United.

And Lampard thinks Chelsea are too young and inexperienced to mount a title push this season as they prepare to face third-placed Leicester, whom he does see as serious contenders.

'Leicester are in the race and there are others, but we have to not consider the race too much as it stands,' Lampard admitted.

'When people were touting us as title challengers, we do have the squad when you look at the composition of it — but it's very young, particularly in the forward areas.

'We don't have the history of players in those areas that this club has had before, who are goal machines or assist machines that win you games.

'We are developing those players and I believe in them strongly, but at the moment we are not quite where other teams around us maybe are at the front end of the pitch. For us, there could be tough times.'

Lampard has not been helped by the form of £53million signing Werner, who has gone 10 league games without a goal and missed a sitter in the win over Fulham at the weekend.

But the Blues boss downplayed comparisons between the 24-year-old and Fernando Torres, who did not score for Chelsea for 14 games after joining from Liverpool for £50m in 2011.

'Fernando Torres had difficult times here but came away winning the Champions League and being a pivotal player in that run to winning it, so I don't think we should compare too much,' said Lampard.

'Timo Werner didn't score the amount of goals he has scored over the last few years by chance. He has scored those goals because of his huge talent.

'It is a tough time here for him at the moment, but it is a small period in what I believe will be a fantastic career for him going forward at Chelsea. I have no doubts over that.'

Meanwhile, Lampard says he will speak to veteran centre half Thiago Silva after the Brazilian threw his shirt to a construction worker at Fulham — against new coronavirus protocols.

'It was very much an innocent thing,' added Lampard. 'This is someone who got asked for a shirt, who wasn't quite clear of the rules. But I'll speak to Thiago very clearly.

'Swapping shirts with anyone at the moment is not what we want to do.'