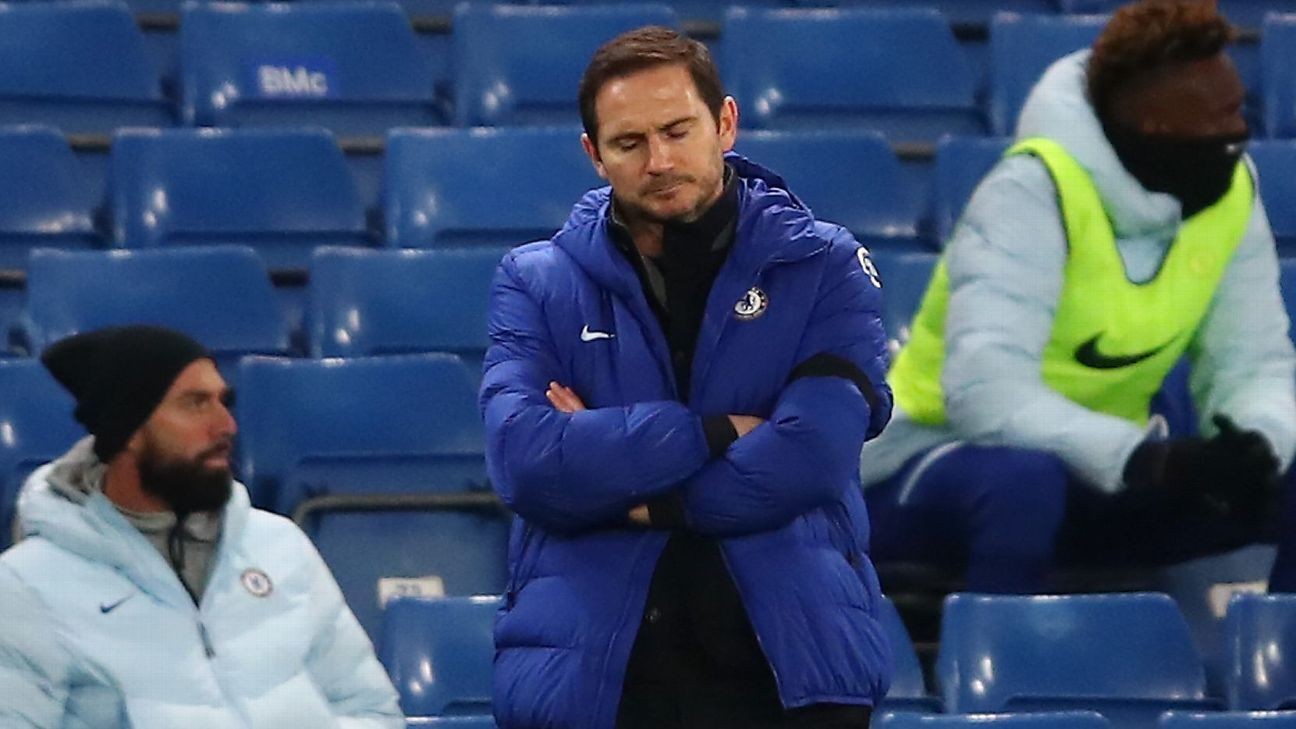 Frank Lampard's cause at Chelsea has been aided by the club's lack of alternatives as boss -- ESPN's Insider Notebook has the latest. PLUS: Manchester United won't let Donny van de Beek leave.

Frank Lampard's fight to keep his job at Chelsea is being aided over the club's leaders struggling to identify his successor, sources told ESPN.

The 42-year-old is under mounting pressure with the Blues 11 points adrift of Premier League leaders Manchester United after winning two of their previous seven Premier League games.

While there is an acknowledgment of the job Lampard did last season in securing a top-four finish despite a FIFA transfer ban and reaching the Champions League round of 16 for the second consecutive year, senior figures at the club expected more this term having spent in excess of £220 million on players last summer.

Chelsea owner Roman Abramovich will decide Lampard's fate, but sources told ESPN that advisors to Abramovich, and director Marina Granovskaia, are torn over who should succeed him.

The disagreement in part stems on whether to make an interim appointment until the end of the season -- with former Blues manager Avram Grant and former Chelsea striker Andriy Shevchenko possible options -- or wait until closer to the end of the season when more options would be available. Grant, for example, has not managed in the Premier League since 2011 after he was sacked following West Ham's relegation, while Shevchenko never has.

It is possible for Lampard to turn the situation around, however he will be under no illusions of the merciless approach to managers at Stamford Bridge, considering Chelsea have made 13 managerial changes since Abramovich acquired the club in 2003.

Sources told ESPN several players are confused by Lampard's approach, believing the chopping and changing in his starting lineup is contributing to inconsistent performances.

Sunday's FA Cup fourth round game against Luton (all games streaming live on ESPN+ in the U.S.) offers a chance to return to winning ways but Chelsea then face league games against Wolves, Burnley, Tottenham and Sheffield United in the space of 11 days. -- James Olley

Manchester United have rebuffed loan enquiries for Donny van de Beek, sources told ESPN, and will look to keep the majority of the squad together this month as manager Ole Gunnar Solskjaer prepares to fight on three fronts -- in the FA Cup, Europa League, and the Premier League -- for silverware.

Van de Beek, who arrived from Ajax for £40 million last summer, has started two Premier League games this season, which has lead to talk the midfielder should look to find regular game time elsewhere.

But the Netherlands international, along with defenders Axel Tuanzebe and Brandon Williams, who have also been the target of loan interest, looks set to stay at United because Solskjaer will not throw away the chance to win the FA Cup and Europa League this season while in pursuit of the Premier League title.

Solskjaer has made more changes to his starting XI this season than any other Premier League manager and his side are top of the table at the midway point -- the first time that has happened since they last won the league in 2013 -- but he is still expecting to field a strong XI against Liverpool in the FA Cup on Sunday (all games streaming live on ESPN+ in the U.S.) and against Real Sociedad when the Europa League restarts in February.

United have been fortunate with injuries so far this season and only West Ham, West Brom and Brighton have had fewer players ruled out. Solskjaer is also wary of a COVID-19 outbreak decimating his squad, sources added. So far only youngster Facundo Pellistri and second choice left-back Alex Telles have tested positive for the coronavirus since the beginning of the season, but the United boss is keen to have a large squad if his side suffers an outbreak of the virus. Title rivals Manchester City have seen an increase in coronavirus positives within the club since Christmas, with five players self-isolating in early January, and Sergio Aguero is the latest to test positive.

Solskjaer is looking to end United's five-year trophy drought and is ready to call on Van de Beek during the second half of the season. There is also hope Jesse Lingard, who has made just three appearances, can be convinced to stay until at least the end of the campaign. -- Rob Dawson

play1:03Nicol: Pogba finally realised being a diva wouldn't cut it

Steve Nicol says Paul Pogba has finally put his head down and his game has come together at Man United.

Leicester City's impressive work behind the scenes has seen the club emerge as Premier League title contenders this season, and sources told ESPN the player recruitment set-up at the King Power Stadium has left bigger clubs frustrated at being unable to match the Foxes' ability for unearthing rising stars across Europe.

Manager Brendan Rodgers has rebuilt Leicester's back four since arriving from Celtic in February 2019, with sporting director Lee Congerton, who worked with Rodgers at Chelsea and Celtic, securing deals for Wesley Fofana, James Justin and Timothy Castagne from Saint-Etienne, Luton Town and Atalanta respectively.

Sources told ESPN that Leicester's connections in France gave them a head start on the signing of Fofana, a £36.5m arriving last October, which enabled the club to fend off interest from Tottenham manager Jose Mourinho.

Fofana's performances this season, which prompted Paul Scholes to tell ESPN last week that United should try and sign the 20-year-old, have also raised questions at Arsenal, whose scouts overlooked the centre-half in favour of a £27m move for Saint-Etienne teammate William Saliba, who has yet to play for the Gunners 18 months after his arrival at the Emirates.

Justin, an £8m buy from Luton in 2019, is catching the eye of England manager Gareth Southgate after performing at both right-back and left-back for Leicester this season, filling the gap left by Ben Chilwell's £50m summer transfer to Chelsea. -- Mark Ogden

Wesley Fofana is the latest example of Leicester getting things right in the transfer market. MICHAEL REGAN/POOL/AFP via Getty ImagesTchouameni a target for Chelsea (with or without Lampard)

Chelsea have been been monitoring the progress of Monaco midfielder Aurelien Tchouameni, sources have told ESPN, despite the ongoing uncertainty over the manager's position at Stamford Bridge.

Chelsea are keen to strengthen their midfield in the summer and sources said scouts have monitored the France under-20 international who has been excellent under coach Niko Kovac, and has taken his game to the next level after moving from Bordeaux to the Principality a year ago for €18m.

He has started every game bar one in Ligue 1 this campaign, producing some top performances. The 20-year-old has attracted the interest of a string of clubs but Monaco are set to keep him in the January transfer window, sources said, ahead of what could be a scramble for his signature in the summer. -- Julien Laurens

play1:57Would Chelsea be a better team with Rice instead of Havertz?

Gab Marcotti explains why Chelsea signing Kai Havertz over Declan Rice might be keeping Lampard in a job.

Emile Smith Rowe has made a strong impression of late after breaking into the Arsenal first-team but talk of a new contract is premature, sources told ESPN.

The 20-year-old's inclusion for the Gunners' last five Premier League games has coincided with a dramatic upturn in form, winning four and drawing one to ease the pressure on manager Mikel Arteta. Consequently, newspaper reports said that Arsenal are ready to offer the attacking midfielder an improved deal on his existing agreement which expires in 2023.

However, sources close to the player told ESPN Smith Rowe remains focused for the time being on cementing his place in the team before considering his contractual situation later in the season.

The Gunners are interested in offering fresh terms but have spent this month focusing on trimming the squad with Mesut Ozil, Sokratis Papastathopoulos and Sead Kolasinac all departing rather than discussing renewals.

Arteta said on Thursday: "Let's go step by step. Emile has done really well, he deserves his chance, he's taken it and is grabbing it with both hands and in a really convincing way. Let him be and things will come naturally." -- James Olley

play1:32Nicol: Smith Rowe looks like a veteran already for Arsenal

A whole host of clubs from England, Germany and Spain may be chasing his signature, but Real Madrid's Martin Odegaard has his eyes set on one club: Real Sociedad.

The 22-year-old impressed on loan at Sociedad last season, scoring seven and contributing nine assists in all competitions, and his performances forced Madrid into cutting his two-year loan short, so he could return to his parent club for the 2020-21 season.

Sources told ESPN that Odegaard feels let down at Madrid, though, as the attacking midfielder has not been given enough playing time to make an impression at the club this term after just two league games. Sources added that Odegaard was also excited to see out the second year of his loan at Sociedad.

Arsenal have been linked with the Norway international but the player's preference is to rejoin Sociedad and sources said talks over a new loan there have been going on since the start of December.

The only stumbling block to a new loan at Sociedad will be the loan fee involved, but the La Liga club hope to fund a move for Odegaard and sources added the club believe they are in pole position to beat Arsenal and other top clubs in Europe, considering their initial loan for the player was ended early. -- David Cartlidge