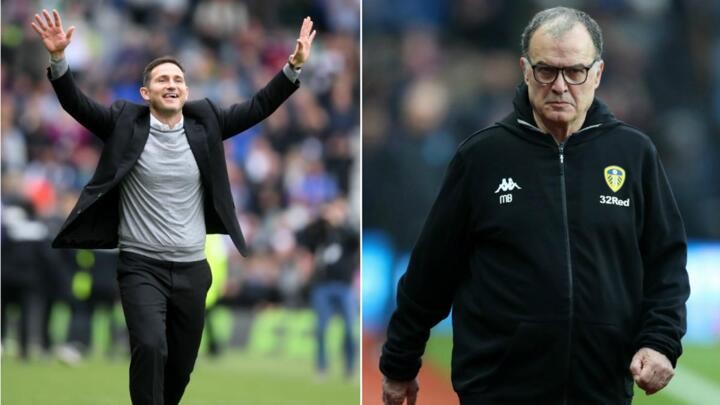 Frank Lampard does not care whether the 'spygate saga' changed Marcelo Bielsa as the Chelsea and Leeds United bosses prepare to revive their rivalry. Almost two years have passed since Bielsa sent a Leeds employee to covertly watch Derby County – then managed by Lampard – in training.

That person was caught outside the Rams' training ground, and Leeds were fined £200,000 by the English Football League in February 2019.

Bielsa, who said it had not been an isolated incident, later declared he paid the penalty personally.

The Argentinian said this week that he had learned from that incident, in terms of what was not acceptable in the English game.

His Leeds side went on to be eliminated by Derby in the 2018-19 Championship play-off semi-finals, with a 1-0 away victory for Bielsa's team following by a crushing 4-2 home defeat to Lampard's men.

Now Bielsa and Lampard will meet again, as Leeds travel to Stamford Bridge on Saturday.

Speaking in a news conference on Friday, Lampard said: "I'm absolutely not concerned about what lesson he’s learned or not.

"I'm not going to hang on it with this game. It's long gone. I respect him and I respect Leeds. I'm mainly concerned with us being right to try to win the match."

The Chelsea boss stressed: "It's in the past. It was a great news story, it had a lot to it, and it's gone.

"So it was a very proud moment for us – for myself actually – to go against him and win that game, but it's a game long gone now.

"I go up against him with a team in great form. I just see the football side now."

Chelsea sit third in the Premier League after 10 rounds of matches and are unbeaten in eight, with Leeds 12th but catching the eye with a string of energetic performances.

The omens may not be great for Leeds, given Chelsea have only ever lost three times in home games against promoted teams during the Premier League era – to Nottingham Forest in January 1995, against Charlton in April 2001 and in a clash with Bournemouth in December 2015.

They have an 82 per cent win rate – 68 wins from 83 games – against such sides at home, and Lampard has an inside line of sorts on two of Leeds' best attackers, having played with Jack Harrison at New York City FC and had Patrick Bamford as a colleague at Chelsea.

Bamford, who could not make a first-team breakthrough at Chelsea, will fancy the occasion, given his form away from home with Leeds this season.

Only Son Heung-min and Jamie Vardy have scored more away Premier League goals than Bamford this season, with six of his seven strikes coming on the road.

"I like Patrick as a lad, he's playing very well and I'm really happy for him," Lampard said.

Asked about Harrison, Lampard said: "Jack is a million miles from the player he was in New York.

"I hope that doesn't sound negative in any way because he was a real developing player at that point.

"He's an absolutely lovely lad, I've got so much time for him and I keep in touch with him. I actually spoke to him the other day."