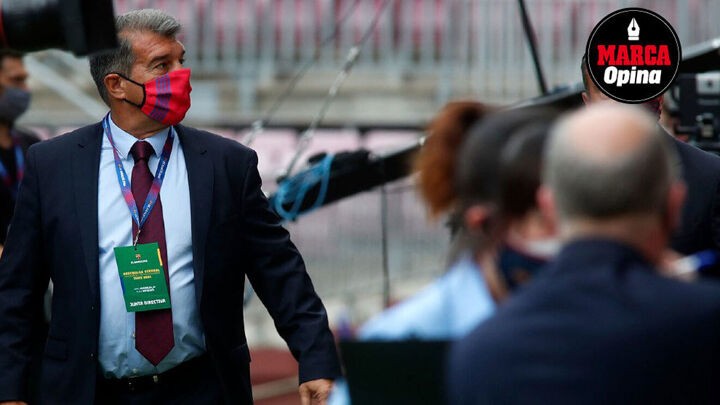 Joan Laporta hosted Barcelona's general assembly at the Camp Nou on Sunday, and managed to tick all the important boxes he had on his to-do list. Some were complicated, like the approval of the club accounts for the fiscal year of 2019/20, the budget for the 2020/21 campaign and for the refinancing of the club's debt with a credit of 525 million euros.

Yet the Blaugrana president did not put the club's involvement in the controversial Super League project to a vote. He has not risked being knocked over. He has only defended it, but no decision has been made about it. He wants to buy time. Laporta remains attached to the competition regardless of the sanctions that UEFA may impose on him or the club.

The Catalan lawyer has previously defended the positives that it could bring to Barcelona. He did not explain how UEFA have threatened and pressured all 12 original participants, of which only three remain: Barcelona, Juventus and Real Madrid. He has also reiterated the urgent need for additional income to battle back against the likes of PSG, who snatched Georginio Wijnaldum from under their noses.

He even highlighted the "solidarity" of the tournament.

"The entire football pyramid would benefit, the big clubs and the small clubs," he said.

Yet Laporta did not want to put the Super League to a vote on Sunday afternoon, aware that the result would still be negative, taking into account the reluctance among the members. He only wants to address it when he knows he will come off successful.

The Barcelona president wants to gain some time, yet he is certainly not giving up. With the postponement of the vote, he is be able to better prepare his strategy to convince the Blaugrana members and the clubs that pulled out.

Laporta believes the likes of Inter, AC Milan, Manchester City and Liverpool, who stepped away from the project can have their minds changed.

And only then, when he has public support, will he put the proposal forward to his delegates. Not before.