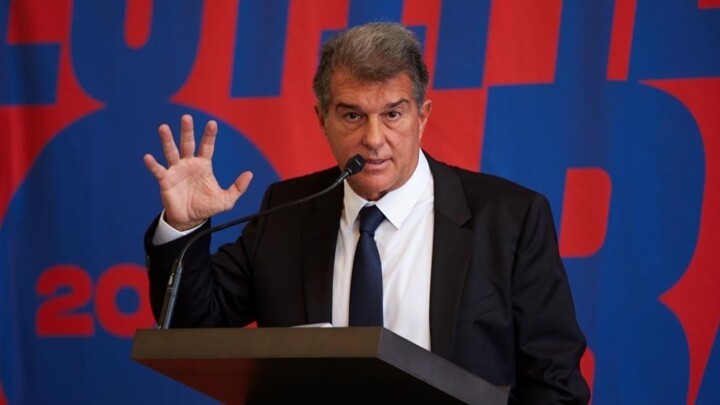 Joan Laporta this Monday presented his candidacy for Barcelona's presidential elections, which will be held on January 24.

In his speech, Laporta discussed his plans for the club and his desire to get the Blaugrana back to winning ways, leading them to the top of world football again. He also spoke about his desire to keep Lionel Messi at the Camp Nou.

"I announce my candidacy and I'm doing it because I love Barcelona, its people, its fans and La Masia," Laporta declared. "I love this club and I want to serve Barcelona again.

"We have the necessary preparation, experience and determination to make the required change and to bring Barcelona back to the top of world football.

"There are millions of fans around the world who want another successful period. We have to recover the pride of Barcelona. I want to push the club to achieve this glory.

"I will work tirelessly so that Barcelona are an engine of optimism, to recover the motivation of our players and to dominate in the Champions League, which is our priority each season.

"Barcelona and the Champions League is a success story that has sadly been broken.

"We will make decisions that bring us back to the top. Presiding over Barcelona was a great honour and they were the best years of my life, so doing it again is the biggest challenge I've had.

"If I have the members' support, I'm sure we'll do even better."

Messi's future is one of the most pressing issues facing the club and Laporta knows that the captain has to stay.

"I've seen the love that Messi and his family have for Barcelona," Laporta said. "He's comfortable in Barcelona and so are his family.

"He wouldn't move to Paris or Manchester for money, but we have to be aware that we have to recognise players and value them. There will be time to talk, we can make a long-term proposal that will motivate him."

Transfers are something that will undoubtedly need to be addressed, but, for now, the presidential candidate isn't willing to talk about possible arrivals.

"It would be disrespectful to our excellent first-team players to talk about that," Laporta added. "We have to push them to succeed, we won't destabilise them by talking about that.

"Before signing, we have to look at what's here. We will be prepared to reinforce the team if it's needed and if the coach requests it.

"The final decision will by mine and my board's."

Ronald Koeman's position could be in doubt when the new president is decided as Xavi Hernandez is tipped by many to return, depending on the winner of the elections.

"Koeman deserves respect," Laporta said. "He's a Barcelona great and has a contract. We have to want him to do well.

"He doesn't have an easy job, but he's our coach and he has a contract.

"I respect Xavi a lot. I had him as a player and we have a very good relationship. We message each other.

"He's a reference for young people, he's a man who knows a lot about football and has dedicated his life to football.

"I haven't spoken to him about the sporting project."

Barcelona's financial situation is complicated and they have crippling problems, which have prevented them from signing recently.

"Those who work with me will do so with optimism," Laporta said. "The situation is complicated, but we can generate new income by entering the digital world.

Laporta refused to be drawn into criticising Javier Tebas.

"I don't want to get into a controversy," he said. "I won't attack anyone and hope that they won't attack me either.

"I won't hold back what I feel. Barcelona have the ability to defend the rights and freedoms of Catalonia and the millions of Barcelona fans with a certain way of thinking.

"I'm here to manage the sporting project well, and Barcelona are obviously a Catalan club. Every position fits in my Barcelona. There's room for everyone.

"I'll work tirelessly to be an engine of optimism for those who love this club from all corners of the globe, it's an obligation for everyone to feel comfortable at the club.

"Our priority is to return to the top of world football, because that will allow the finances to recover more."

Laporta also outlined his commitment to women in football.

"We're sensitive to gender equality," he said. "That will be seen in the board and management bodies.

Pep Guardiola recently extended his contract at Manchester City, but that hasn't ruled him out of a potential return to the Camp Nou in the future.

"He's a friend," Laporta said of the ex-Barcelona boss. "If he's happy with his decision, then I congratulate him.

"I knew he was staying [at City] and that he wasn't an option now."

Laporta tried to avoid talking about potential rivals in the elections, though he did comment briefly on Sandro Rosell.

"I don't know if he's going to put himself forward," Laporta said. "When we've met, we've remembered the good times.

"We've ignored the bad moments and the conflict.

"I don't consider the others to be rivals. We all have our own ideas of what Barcelona should be."

On La Masia, the candidate's commitment is clear.

"We'll turn it into a centre of sporting excellence," Laporta explained. "We'll enhance it even further.

"It's the insurance of the sporting and economic viability of the club.

"Having Messi's leadership would suit us very well."

Barcelona recently reached an agreement to reduce the players' salaries, but Laporta insisted that the current board don't have any authority.

"The agreement is waiting to be ratified," he said. "The board of management have no power.

"I wouldn't like for them to go beyond their function."