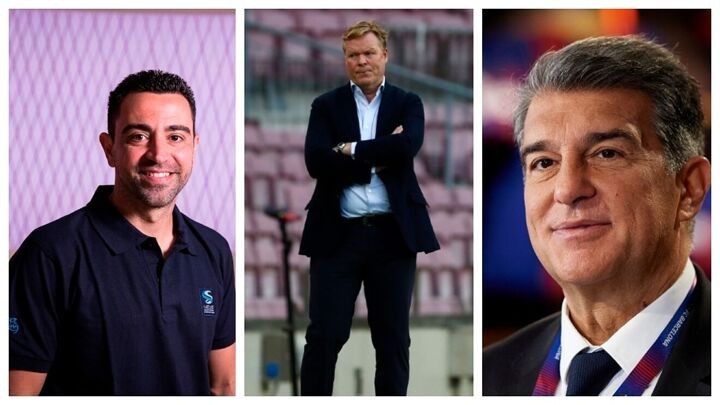 The passage of time hasn't completely removed the discomforting uncertainty felt on the Barcelona board.

The Blaugrana's defeat against Celta Vigo, which ruled them out of the winning to win the LaLiga Santander title, has left Joan Laporta and his board even more upset than they had already been. The president has doubts about Ronald Koeman's ability to lead their project forward and they're not certain that he will be in charge next season.

Nothing has been decided yet, but the market is being tested.

Laporta is considering sacking Koeman, but it's hard to find an immediate replacement, made all the more complicated by the club's financial difficulties. In the midst of all of this uncertainty, Xavi Hernandez arrived in Barcelona on Monday, and he has been one of the names most linked with the Camp Nou bench. His reason for visiting Catalonia, though, is for a holiday.

The president and coach will meet after the game against Eibar, and a decision will need to be made as the Dutchman still has a year to run on his contract after this season.

Laporta isn't happy with Barcelona's results, nor is he happy with the way they've been playing. But he is aware that sacking Koeman would lead to complications, plus paying him off wouldn't be easy for the club.

Koeman is seen to have failed at the club - similarly to the projects of Quique Setien and, to an extent, Ernesto Valverde - but the Dutchman has Barcelona DNA. So, should they change coach, they want it to be for a safe pair of hands and someone loved at the club, which brings Xavi to the table.

Xavi is top of Laporta's list to replace Koeman, although there are some doubts about his ability to lead the dressing room.

"I don't know anything, really," Xavi said as he arrived in Barcelona. "I've come here on holiday."

Xavi has already had contact with Laporta during the elections, and the club will go knocking on his door again to see if he would be interested in the job before dismissing Koeman.