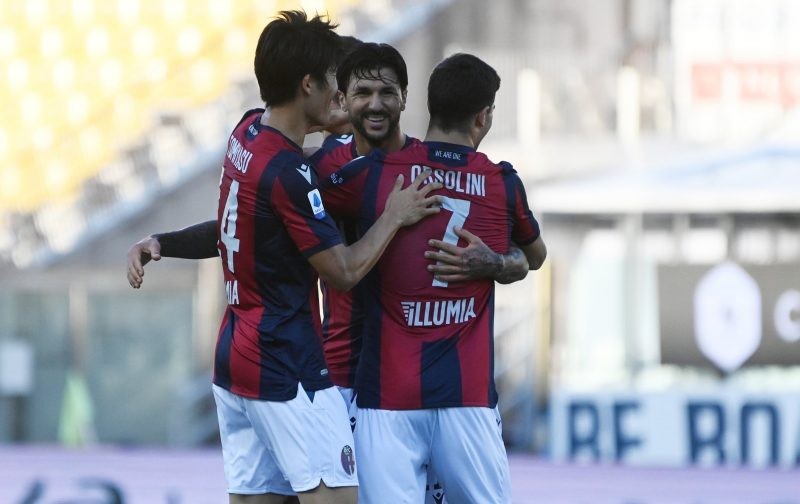 STADIO ENNIO TARDINI (Parma) – Roberto Inglese marked his comeback from a long-term absence with a last-second equaliser for Parma, ensuring their losing streak ended as they took a point from Bologna after being 2-0 down.

First-half goals from Danilo and Roberto Soriano were enough for the visitors against what was an unusual XI and setup chosen by Roberto D’Aversa, though he did shift back to basics in the second half and the hosts were much improved as a result.

Parma’s wait for a win over their fellow representatives of Emilia-Romagna extends again, having last beaten Bologna in the top flight back in December 2012.

Everyone at the Tardini was still trying to work out how Parma were playing when they fell behind. A simple in-swinging corner from Riccardo Orsolini found a leaping Danilo in the area and he headed out of Luigi Sepe’s reach with just three minutes played.

That lead didn’t take long to double as the Crociati looked lost. Takehiro Tomiyasu found Roberto Soriano on the edge of the area and after evading a challenge he whipped a low shot around Bruno Alves before the Portuguese got close enough to put in a tackle and found the far bottom corner. To say Parma even created a chance in the opening 45 minutes would be generous, but they did have two wayward attempts through Riccardo Gagliolo and Jasmin Kurtic respectively and, those shots included, neither goal ever looked like being troubled.

Dejan Kulusevski and Yann Karamoh were introduced at the break as Roberto D’Aversa recognised his gamble hand’t worked, reverting to their tried and tested 4-3-3.

Juraj Kucka came close within three minutes of the restart, heading a Hernani freekick over and Parma already looked to have woken up.

Even without any fans in attendance, the game started to feel more like a derby as it progressed, with the tempo increasing and tackles coming harder as a result. Sepe was called into action to keep the margin at two as he denied Musa Barrow at his near post.

Kulusevski got another shot off shortly after the second cooling break, but it went just over the returning Roberto Inglese’s head and off target.

Mattias Svanberg had a sight at goal shortly after his introduction, but his effort was tame and Sepe gathered easily.

Alberto Grassi caused Lukasz Skorupski the most trouble, forcing the Pole into a strong save as the game entered its final ten minutes.

Inglese came close to halving the deficit and giving Parma hope in the final minutes of the 90, but his shot was headed off the line by Ibrahima Mbaye and Gagliolo had a shot tipped over.

The resulting corner ending up on Kurtic’s head who, from an unmarked position at the back post, headed in to give the Gialloblu brief hope.